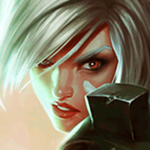 Riven Build Guide By anriofastoria Updated on May 30, 2022
Follow

Blade of the Exile (R)

Hi all, I am anriofastoria. I have played league of legends since season 2, and have mained Riven since late season 4 as well as a few other AD carries. I like like Riven mechanically and although there are many different champions that can exceed in the things she accomplishes, I think her kit is very well rounded. Particularly, her mobility and interactions leads to many great games where your experience and skills matter. With that all said, here is my first attempt at a written guide. Thank you for reading.

A lot of this guide is written based on my experiences and a review of Azhy's gameplay.

Runes
As of right now,

Overheal converts 20 - 100% of the healing in excess of your maximum health into a shield of 10 (+9% percent of maximum health), which in my experience is effectively a 75 - 256 shield. The issue is that at level 1 with

Doran's Blade the conversion of healing into a shield is:
Level 1 85 AD x 0.025 (omnivamp from

Leave overheal to ADCs and champions with

Legend: Alacrity I think in many instances its helped me in duels, allowed me to split-push quicker, and v. importantly it is a fun rune slot.

Last Stand increases damage to champions from 0 - 11% based on your percent missing health, whereas

Coup de Grace increases damage by 8% if the enemy champion is below 40%.

Anecdotely, a lot of the damage from riven comes from the end of her combo when she is low on a duel i.e., windslash and

Goredrinker proc. After watching my matches, I also coincidentally often fight at about 45 - 50% HP.

Transcendence at level 5 and 8 grants + 5 Ability Haste(AH). AH has diminishing returns, with that said early AH is quite good in scaling into the match. At level 11, it also reduces the cooldown of your ablities by 20 percent. You or a teammate killed on champion? This allows you initiate closing the gap on the next champion for a multikill.

Nimbus Cloak is aggressive and synergizes v. well with

Unflinching is great against champions and teams with tenacity. If I think about in lane matches, I think of champions with lingering effects i.e., Nasus (wither), Trundle (chomp), and Tryndamere (mocking shout).

Second Wind is good against ranged champions, or champions you anticipate can poke you and therefore proc Bone Plating before it has any effect to reduce damage.

Bone Plating is good against any champion with an auto attack recent.

Teleport allows you to transport to an ally structure with a cool down of 6 minutes. After 14 minutes in-game, allow you to transport additionally to an allied ward or minion with increased movement speed and its coodwill will decrease to 4 minutes.

I personally recommend this over ignite because it allows Riven to split push effectively and work as a disruptor (2 people will have to come after you, alleviating pressure from your team). Once you get away safely, you can reconviene with your team to with a fight or objective.


There are a lot of online guides on ability combos, and other streamers i.e., Azhy to reference from. I'll write the simple ones here (AA = auto attack):

The difference between a full trade and teamfight is that you'll want to priorities having all the CC out immediately to lock down the enemy team and then apply damage (that way you do not get cc locked yourself).

Broken Wings can wallhop, either to escape or engage. I am working on a compilation, and in the meanwhile watch this excellent video explaining the mechanic.
Itemization

Health Potion start is a safer start, but not neccesarily recommended. I prefer winning trades in damage than by sustain.

On first back, I prioritize purchasing

Caulfield's Warhammer because the active allows additional trade potential and makes farming safer (it's range is larger than your auto attack range).

Goredrinker is the first item, followed by

Ionian Boots of Lucidity or

Plated Steelcaps. I rarely find myself opting for

Mercury's Treads except for against champions like Malphite or Kennen.


The next item is another

Caulfield's Warhammer into either

Top Lane Matchups
In progress in consideration there are 48 matchup to currently write on. Thank you for your patience.
Laning Phase
The laning phase is an impactful factor on how the mid and late game will go.

Riven has low sustain, but v. powerful trade potential in short and extended trades and has a decent scaling into the late game. There is no way to summarize all of what to expect and how to react in a match, but that is what makes League of Legends fun. Here is my thoughts on how to improve laning phase and late game play.


At level 1, Riven has a powerful trade if the enemy champion stays in range because you can q in >> aa >> q2 >> aa >> q3 >> aa and walk away. This often does not put champion in kill range for ignite, especially in patch 12.10, however, will allow you to play more offensively at the start of the match.

At level 3, you have access to two very safe trade patterns: q in >> W >> aa > E out or Q3 in >> AA >> W >> E out. Both of these trade patterns will allow you to come in, deal damage, stun lock, and dash out before the enemy champion is able to react. This pattern is especially strong against champions like

Sett, who will not be able to catch you with their pull in spells.

Through level 3-5, continue these short trades in damage when possible while last hitting minions. Make sure that your abilities primarily attack the enemy champion, not the minions, if your goal is not to push in.

I usually back before level 6 to purchase as much AD as possible. At level 6,

Blade of the Exile works similarily to

Final Hour, in that you recieve a major AD stat boost and it additionally grants you an execute that is most effective when the enemy champion is below 25% health. Finally,

Runic Blade now increases the additional damage on autoattacks from 30% >> 36% bonus AD. You are well in place to go in for the kill.


You're mobility will allow you to extend an escape. Use the top lane brushes,

Valor to dodge cc or shield damage, and

Broken Wings to extend the distance between you and the enemy team. Remember that the third cast of

Broken Wings can wall jump, and that:

1. You can extend the range traveled by clipping terrain
2. You can knock back enemies by clipping them in the direction opposite your destination


It is worth mentioning that in some well-timed instances, you can knock back

Lee Sin during the second cast of


In late game, you can intiate well-timed fights by catching enemy champions out of position especially with

Flash. With that said, make sure to disrupt the enemy team and understand that while you have dive potential, you may be not be ahead to dive + secure a kill as well as an assassin. An overcomittment to a dive may lead to inting. Late game, your ADC WILL have more sustained and in some cases burst damage than you therefore, please peel them in their fights.


Summary As a distruptor, you work as both a tank, initiator, and damage. You're responsible for a lot in the teamfights and for the most part, should prevent their frontline from reaching you carries and then dive the major threats (AD or AP carries).


Riven is one of the most mobile champions in the game, despite being released in the end of Season 1. With succesful timing, your wallhop with

Broken Wings can allow you to have 2-3 enemy champions chasing you, even through both north and south jungles (

Valor will prevent most of the turrent damage when moving across the mid lane outer and inner turrets.
Comments
Guide published: 05/30/2022