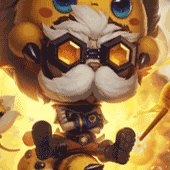 Echo's stacks are represented by a stack counter under

Seraphine's health bar. The second cast must complete for Echo stacks to be consumed; if the cast time does not finish or does not begin at all,

Seraphine will keep her stacks. The Notes will fire from allies regardless of how far they are away from

Seraphine, while alive, will play music if there is at least one ally champion nearby. This is audible to

Seraphine and all allied champions that are in range of Harmony, indicative of if they can receive a Note or not.

Seraphine can play aggressively into melee match ups, or champions she out ranges.

Seraphine's notes will increase the damage from her basic attacks, encouraging you to trade with your enemy laner. A simple Q into Auto Attack combo will chunk the enemy out, especially if you get the second cast from

Seraphine has a relatively safe laning phase, especially if you have

Flash available, but that doesn't mean she is immune to ganks and death. Outside of

Surround Sound, which has a 26 second cooldown at rank one - and does not heal unless you are already shielded,

Seraphine is a very immobile mage with no dashes or escapes, so you need to use your

Stealth Ward and keep an eye on the mini map, as burning your

Flash, and still dying will put you at a huge disadvantage.

Seraphine excels at fighting with her team, and doubly so if you have an enchanter support where you can take full advantage of

Surround Sound. Or if you have a team with slows, immobilizes or grounding effects, her CC is at it's strongest. Taking advantage of

Stage Presence's Echo mechanic can be the different between getting a kill, and an enemy escaping, and what will seperate the good, from the great

Seraphine has decent push potential with

Luden's Tempest. Taking objectives such as

Rift Herald , or even a tower is priority.

During the mid - late game, you want to be pushing in lanes and looking for roams, objectives and kills. As stated above,

Seraphine is very good at fighting with her team, so look to play with one or more of your team mates, especially if they have some kind of CC to proc

During team fights, you want to stay in the back, supporting your team with

High Note and trying to extend your

Encore through as many champions as possible. Keeping an eye on the Echo mechanic for you to take advantage of the different parts of

Seraphine's kit will be very important to excute well in a teamfight, shielding and healing allies correctly, or firing off a huge

Make sure to prioritize objectives once you have secured picks/kills, as they are what primarily win the game.

Rift Herald spawns twice now, so you can prioritize taking one, if not both, to secure extra tower plates and net you some more gold, allowing you to quickly move forward in your chosen build path.
Conclusion

Thanks for reading my

Seraphine guide and I really hope you can take some of this information and apply it to your ranked games! Please drop me a comment, and let me know if there's anything I can improve on. I hope you can pop by any of my social media's and say hi! Feel free to check out any of my other midlane champion guides, and I hope you enjoy them just as much.