Bask in their blood! 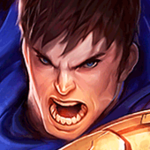 Bask in their blood!

By vortecks
Introduction
Read the League of Legends Wiki page on Renekton before this guide because I won't be explaining much on the basics of this champion, I'm sure that it explains Renekton better than I can.
Starting Items

The reason why long sword

Long Sword is a better option than

Doran's Blade, is because Doran's Blade will eventually be sold leaving you at a 270g deficit. However, if you buy a long sword, this is built into a

Tiamat. This wastes no gold.
Abilities

This is Renekton's 'resource'. Fury should only be used on

Cull the Meek or

Ruthless Predator. This maximises damage as

Slice and Dice does not add damage. Make sure that you have enough fury before entering a fight.


Fury can be gained by:

This is the first ability you should level. Use

Cull the Meek to take the first three melee minions in lane.

Cull the Meek can be used to poke in lane as it has a significantly larger range than Renekton's autoattack range.
Using an empowered

Cull the Meek is great when in low HP and there are a lot of minions in lane and in teamfights. The heal is increased by 4x making it the best option against multiple opponents.

Ruthless Predator is Renekton's main source of damage. This is a single target 0.75s stun or 1.5s when empowered. This procs on hit effects such as

Blade of the Ruined King. Use your fury to empower

Ruthless Predator when you are in a 1v1 or need to lockdown a carry. This deals more damage than your other abilities and increases the stun duration to 1.5s.

This is Renekton's dash(es). You need to hit the first cast of

Slice and Dice in order to receive the second cast. This is the ability you do not want to use your fury on. The armour shred is a waste compared to a damage, heal or stun increase.

Slice and Dice can be used to dash over small walls and cut corners. Found here.

Dominus is Renekton's ultimate ability. He gains bonus health, attack range, surrounding AoE damage and 20 fury instantly. Over the duration he gains 5 fury per second. Preferably you want to use this to cancel your

Ruthless Predator animation however, most of the time you want to activate it before a fight stsrts. This allows you to have enough fury to get one empowered ability.

Conqueror is the best option for fighter matchups such as

Riven etc. Conqueror excels in extended trades where you know you will win. It deals less damage than

Press the Attack however, it gives healing and true damage which is great for when the enemy has bought armour.

Quinn.
Examples for melee matchups are:

Ruthless Predator will stack 2/3 parts of

Press the Attack however, if you use it to reset and autoattack you will proc

is the best option here as you won't use

Overheal due to frequent trades and

Presence of Mind's mana is wasted.

You should take this as it reducing the duration of your autoattack, making combos faster.

can be changed with

Last Stand. Due to

Last Stand will become more useful and output more damage. Also it gives a surprising amount of damage which your opponents won't expect.

Take this tree against most matchups.

Magical Footwear allows you to buy your

Slice and Dice to come off cooldown more often to allow you to trade more.

Second Wind allows you to survive much longer with the health regeneration that it provides.

This allows you to soak up more damage.

You need this. Tiamat allows you to push waves faster which helps you to reach your 2 item powerspike faster.

Renekton is a caster type champion, he will stack

Black Cleaver's passive extremely fast and be able to maximise the armour shred. The 20% CDR extremely useful for his longish cooldowns.

Blade of the Ruined King synergises extremely well with

Gives extra heals, 80 AD and finishes 40/45% CDR. This is a more teamfight oriented item as it will heal

Cull the Meek. Also the 80 AD is nothing to ignore.

If your team needs a tank choose one of these items. Usually you want

Sterak's Gage for the raw health however, if their team is AP heavy, purchase

If your team desperately needs an engage, buy this item. Even if it gets popped, it will give your team enough time to follow up.

If you are already building tank,

Titanic Hydra will synergise well with your bonus health. If not, build

Ravenous Hydra. Make sure to build these items last as the stats they provide are lacklustre compared to other items due to the AoE damage provided by

Complete Guide to Renekton
By Drake6401

GoliathGames' Master guide to Renekton
By I Am Goliath