It's time for the Midseason 11 Guide Contest! Create or update guides in the following 3 weeks for the chance to win up to $200 in prizes!
Vote Vote 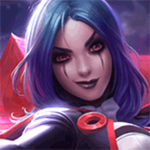 By Arameria
Introduction
Hey Everyone!

Glad you guys have taken the time to take a look at my Akali guide, My name is Arameria and I live in the Netherlands. I've been playing League of Legends since the end of Season 2. I always played countless normals with my friends and found my way into the Midlane/ADC role through there. Even though I play almost every champion by now, there are a couple that stand out to me, and one of them is Akali!

After investing a lot of time in watching videos and streams and reading guides on how to play this Sneaky Assassin, I found my way into her mechanics and combo's and am ready to take them out on the rift for some ranked experiences which can be seen on my stream here


Runes
Although Akali's main purpose will always be to assassinate her enemies, there are different approaches to her playstyle, when it comes to Runes, I have split them up into three different playstyles, so I also strongly recommend to always consider which one of the three playstyles you will need in game before you get into the loading screen.

Great for the starting Akali player, this playstyle is build around having a rather safe laning phase, after which you will constantly rotate to one of the sidelanes to push it in, after which you will be back with your team as fast as possible to have a fight around pressure or objectives. Take this page if you are looking to team-fight a lot, but want to have pressure on side lanes as well. Be aware of the late-game, as it will give you less dueling power and burst.

Great for advanced Akali players. This runepage is pretty much the same as the Mobility/Sustain Runes, except it will give you more power in the late-game and in extended trades, with Conqueror you will be able to have long trades with enemies and you will be able to fight enemies in side lanes, so instead of joining your team after pushing the waves, you will want to look for a fight where the enemy comes to you, and you try to outplay them.

Last but not least, the Assassin Playstyle, for the most advanced Akali players, gives you the best burst damage possible, which is traded for sustain and mobility. With this Playstyle you are always on the hunt for squishy targets to oneshot when your R is up, if you get a lead you will want to get onto the enemy backline and try to make them disappear with all your damage!

Fleet Footwork gives you more sustain in lane and a bit extra movement speed. This keystone can guarantee you a free healing auto attack at some times, something I always like to do is, when I see my

Fleet Footwork coming up, I like to move up and hit a Q on the enemy champion, if it hits, I go in for a quick Auto-Attack and then with the movement speed and heal I get, I move back out, this guarantees me an almost free trade.

Conqueror gives you amazing 1v1 potential, if you go for long trades and manage to get the heal in, you will be almost unstoppable in a 1v1, I always like to take this if I am going to splitpush a lot and if I'm looking for extended duels in the sidelanes.

Electrocute is perfect for short trades, this rune makes you an unstoppable assassin, you can jump in on people from the bushes and ambush them before they'll know it! Beware that taking this tree will make you squishier and give you less early-game sustain. So play well around your power spikes!

Triumph has for me always been the best choice in the 2nd Row of Precision, it can save your life and can heal for a lot, also makes it possible to fight multiple enemies at once.

Legend: Bloodline takes a while to come online, but when it does, it will give you a lot of sustain in the late-game, together with a

Hextech Gunblade the healing you will get in a fight is insane, it will almost always force enemies to go for anti-healing items.

Coup de Grace gives you a lot of damage on enemies that are low, this is especially good with the second part of your

Perfect Execution, which will give you a damage boost that you might just need in a 1v1!

Shuriken Flip) and your

Perfect Execution, the extra lethality and magic pen it gives you will always work in your favour in duels!

Eyeball Collection rewards you for winning your duels, the more enemies you kill, the stronger you will get, if you're going for the Assassin Playstyle, you'll need all the extra AD/AP you can get!

Ultimate Hunter is a really important rune for Akali, it's always a tough choice to choose between

Ultimate Hunter, Akali generally has a really long cooldown on her

Perfect Execution after the nerfs, which makes this rune insane after stacking it. Always think about what you will need when making this choice, do you want sustain or damage, in my opinion I'd choose damage in the lower ranks and I would go for sustain in higher ranks!


That pretty much covers it for the Runes Chapter, these runes will at the moment be the ones that I recommend when you play Akali, try them out and let me know what you think!
Other Guides
Click the Image to see any of my other guides!

Work in Progress
I will be working on the guide and uploading chapters by time! Keep checking so you will be up to date with the latest Akali Tips & Tricks!
What to Expect
Here's an overview with the upcoming updates!