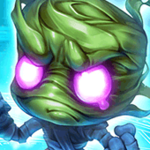 Runes: ONE AND ONLY PAGE

My name is Boukster aka. Mr Amumu. It's very cheesy to name yourself similar to a champions name, but w/e! Sooooo I decided to write a guide on Amumu, just because I really enjoy helping others with this amazing and fun to play champ..

His passive makes tanks vulnerable for magic damage. It converts 13% of the magic damage received as true damage. As soon as a fight starts, make sure you activate

Cursed Touch on your target(s) and debuff him/her/them.

Perfect ability to engage, with its long cast-range and the 1 second stun, it creates a nice opportunity for players to join the fight or to re-position.

If you miss, you'll have to wait quite a long time for the ability to cool down and be reused. It's cooldown is a big downside of this ability, during this period make sure you play defensively and do not overextend.

Great AoE pool. Activate this ability to keep your passive

Cursed Touch active on the targets for the debuff. Combine this with

Liandry's Torment for some nice damage over time (DOT) and damage per second (DPS). Enemies with the biggest HP should be focused first.

With all the AoE potential, the damage is disappointing when build as a tank. This is mainly used just to activate your passive

Cursed Touch and not for damage.

This is your main ability to deal a damage burst to enemy's with a lower hp maximum preferably. The damage is okay when building as a tank, but with a couple of Ability Power items like

Liandry's Torment you'll be able to deal quite a lot of damage. Being hit by a basic attack reduces the cooldown on

As it your main damage burst output, you rely on hitting this ability which shouldn't be hard with the range (AoE) it has. Once again, the cooldown on this ability is fairly long, without any minions around you it wouldn't be wise to 1v1 anyone.

Your ultimate, lets say,, what an amazing ability.

Curse of the Sad Mummy is a teamfight changer, with it's range you'll be able to turn fights in the blink of an Eye. With a couple of Ability Power items, this ultimate deals a massive amount of damage as well. Combine it with

Flash to re-position for a spectacle.

If you miss your ultimate, you'll be close to useless in teamfights if you do not have a proper build or when you're behind in the game. The massive cooldown is a real setback.

Keep in mind that every player has his own style and that not every build or item combination will work for his/her style. I'll try to explain my thoughts and style as good as I can.

5. Jungling from Blue Side

(Normally you'll walk away with 200hp at


When you're jungling, you'd always like to optimize your DPS and experience/min. While you're doing

Blue Sentinel you want to position yourself between

Gromp , at this point you should bring it to approximately 30% health. Then you want to smite

Gromp , do not walk towards it, let it come to you.

Amumu has great AoE damage, he can do them both at the same time. Take care when you pull

Gromp , his first 5 attacks come with an enhanced attack speed. Make sure your health is around 30-40% BEFORE you are smiting

Tantrum off cooldown for when you're in between

Rift Scuttler . Advance to top- or midlane after

Rift Scuttler , push it to the lane you want while damaging it.
6. Jungling from Red Side


The difference of speed at the flash + ultimate in both of these video's are quite significantly. If you're watching closely you can see there is a channel in the ultimate of 0.5 seconds. In this window you want to cast your flash, because as soon as your flash lands you instantly cast your ult, instead of 0.5 seconds later. Doing this will minimize the window of the enemies respond time.
Dragon

Amumu isn't a strong early game champion. Try ganking botlane early game to be able to take first drake around 8th min. If this is not possible, make sure to always keep it warded with a Control ward.

Amumu is able to solo

Dragon after lvl 6 with full health.