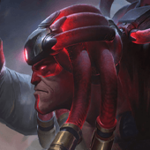 If enemy has burst or speed

By YorickTopOnly
Introduction
Does your ADC suck?
Does your team suck?
Are they trolling?
Playing terrible champions?
Are they one-tricks?
Are you auto-filled?
Don't know who to play?
Looking for free LP and climb?

Currently I have a win rate of 18-7 and grinding an account towards plat.

Nautilus possesses some of the best, if not the best CC kit in the game. It may not be as long as Morgana's CC Chain, but between his Passive

, he has incredible engage and disengage.

Each of his abilities can be used both aggressively to start a fight, or de-escalate it, and at worst, save your ADC if need be.

To put it easily, his passive simply means each AA on a new champion will root them briefly. Use this after a Q engage, and AA both the adc and support alternaitng between the two to get constant resets. Also use this to stop a jungle gank in bot lane during laning phase.

Nautilus' main engage and disengage tatic is his Q. He throws his anchor to the first enemy hit, causing him to pull the enemy towards him halfway, while he also goes halfway. If you hit terrain first, you will pull yourself to that terrain. A helpful tool to run. The hitbox of this Q IS MASSIVE. Use it as the first engage ability, Q,AA,E,W or R, wait for knock up, Q,AA,E,W.

His W is basically a shield. In support you simply press it to negate damage usually during the intro of your combo.

Riptide is multiple waves of slows. You can use this after your combo, but realistically if your team follows up, you dont even need it. They'll be dead by the time you bother pressing E in season 12.

The bread and butter of abilites within a team comp. This is a knock up, similar to riptide, that goes in waves, knocking up the enemy you click on, and enemies that are infront as well. In a line, you could knock up all 5. Once again use this as both engage and disengage.
Lore
A lonely legend as old as the first piers sunk in Bilgewater, the armored goliath known as

Nautilus roams the dark waters off the coast of the Blue Flame Isles. Driven by a forgotten betrayal, he strikes without warning, swinging his enormous anchor to save the wretched, and drag the greedy to their doom. It is said he comes for those who forget to pay the "Bilgewater tithe", pulling them down beneath the waves with him—an iron-clad reminder that none can escape the depths.

Not much to go on there unfortunately, but he gives off a very hidden sea creature vibe (hence his name), almost as if he is a kraken. Some say he's a rip off from the Bioshock universe, but realistically there's a lot of characters in the video game industry based on an old diver's suit.