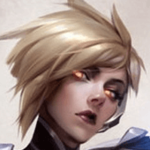 By Yasmaste
intro
As a general rule, it's always best to rush a mythic item. Kraken Slayer seems like the best, because of the sheer amount of damage output you can get.

The pairing of Kraken Slayer and Phantom Dancer seems to be the strongest 2 item spike by far. Once fully stacked, PD gives you 80% Attack speed and 14% Movement speed, which makes it incredibly easy to get Kraken Slayer procs consistently. Your tower taking speed is also incredibly fast. To properly prepare for a fight with this build, stack up 5 auto attacks on minions or jungle camps, then make sure your next auto attack is a Kraken Slayer proc when you spin onto the enemy, this lets you get 2 "Bring it down" true damage procs within 4 auto attacks.

The third item is much more flexible, and it doesn't matter as much what you get now.
Kraken Slayer/ Phantom Dancer combo is such a strong core, that there aren't many wrong answers when it comes to what to build next. Essence Reaver, Infinity Edge, Navori Quickblades, or Bloodthirster are all viable options as a third crit item.


Essence Reaver feels the strongest, as it's 500 gold cheaper than Navori Quickblades, has similar stats, and the Spellblade proc gives tons of burst damage, especially combined with "Bring It Down". Phantom Dancer and Essence Reaver are also the best items to help take down turrets quickly. 80% attack speed combined with the Spellblade proc working on turrets means you very rapidly melt them, which gives you more potential to backdoor and splitpush. When splitting alone, make sure to time your Spinning Slash and Bloodlust to make the most efficient use of the Sheen proc.

The most important time to think about is the 2 item spike in this build. Once you have Kraken Slayer and Phantom Dancer, there are few situations you can't fight your way out of and come out on top. Instead of finishing Tier 2 boots, consider just getting zeal, which gives 7% Movement speed, which is more than the boot upgrade. This allows you to reach your 2 item spike 800g faster, which is great difference.

about trynda
Tryndamere has strengths that aren't comparable to anyone else. You can play the game in a way that no other champion can. Your ability to continue staying on the map even after taking a near fatal fight is unmatched.


The sheer amount of unhindered mobility allows you to pressure the map much better than other champions. Diving other lanes is a very easy, relatively safe way to get your other lanes ahead. Turrets are not safe for anyone on their team.

Laning phase is strong, and you can consistently get early kills on basically every champion, but if you don’t get a lead against certain champions, you can get denied very hard.

You have to be proactive against certain lanes/team comps. Aside from a few champions, you don’t have many hard counters in lane, mainly because they are all in the top lane; 90% of matchups mid lane would be the best matchup top lane.
last words
WEELL, this is the end! If you enjoyed this guide leave a +1 and drop a comment!