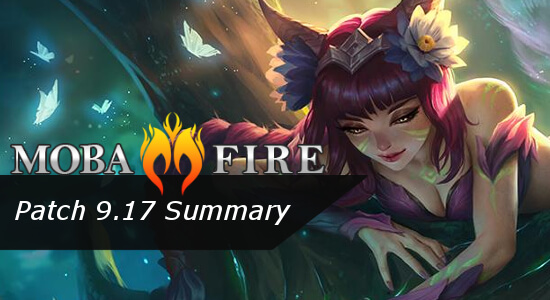 Hello and welcome to the MOBAFire Patch Summary - 9.17!

With Riot promising to hold off on anything too crazy until after patch 9.19 (which this year's World Championship will be played on), this patch features a relatively small selection of champion changes, most notable of which are the updates to

Aurelion Sol should now have a slightly more vulnerable early game in exchange for a stronger late game, with adjustments to

Celestial Expansion also making it easier for new players to pick up the champion. Meanwhile,

Kayle has had the opposite treatment, with her late game potential being toned down in favor of a stronger early game.

Outside of balance adjustments, this patch also includes the release of 6 new skins: 3 which will join

LeBlanc in the Elderwood collection, and 3 which will join the Infernal collection alongside

As always, be sure to check out the full patch notes for details on any changes that interest you (or, if you're more interested in Teamfight Tactics, click here for the 9.17 patch notes for TFT).

That's it on our end, time to hear from you guys! What are your thoughts on the changes made to

Kayle, and how will it influence their viability moving forward? Which other champion adjustments made in this patch are you most excited about? And finally, are you planning on picking up any of the Elderwood or Infernal skins?

Thanks to MissMaw for the signature!