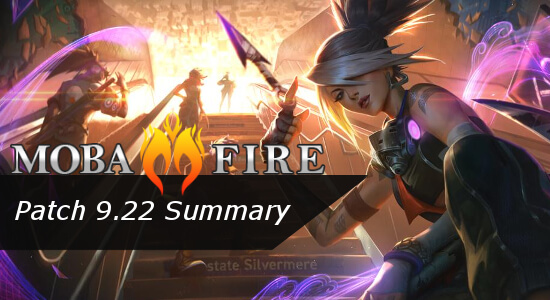 Hello and welcome to the MOBAFire Patch Summary - 9.22!

This is League of Legends' last patch before the preseason of season 10, so it is important to take note of this latest set of changes before you make one final attempt to climb the ranked ladder. In patch 9.22, the focus lies mainly on nerfing some champions which have been doing a little too well recently, with

Xayah being among the champions targeted.

Of course, patch 9.21 also marks the release of

Senna, who will be available on November 10. Wielding light and shadow, compassion and pain,

Senna is designed as a support marksman who wields a large relic cannon as her main weapon of choice. To learn more about her abilities, make sure to visit her champion page and/or watch the Senna Champion Spotlight.

That's it on our end, time to hear from you guys! Which of the nerfs introduced in this patch was most necessary, and which others nerfs do you hope will follow in future patches? What are your thoughts on

Senna's kit, and will you be trying her out? And finally, will you be picking up any of the new True Damage skins?

Thanks to MissMaw for the signature!