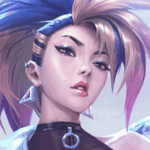 +Rep | Report
Godlvthreat
Started playing in 2014, got perma ban from ranked and realized it not for me, to many AFK'er, DC'er and Inters to climb solo. I play for fun now and still love the game. I still hate those 3 above but it doesn't affect me in norms as I'm still learning to be the best I can with or without a team. I really hate "META" and following the herd like a sheep. I like to step off the trail and into new territory, territory that plentiful with possibilities. Most of my build suggest off the wall unrecommend stuff. But I wouldn't suggest it unless it was OPAF or at least FunAF or FunnyAF.
Comments (0)