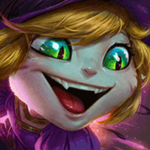 Runes: there is no escaping Tristana

I fucking hate Fizz, and you should too.

Amumu will out gank you and win if you try to 1v1 him. Try to out farm him and steal his camps, then beat him in the late game.

any tank is a great match since you will not be the tank. consider Mord a stand in for every tank

any tank is a great match since you will not be the tank. consider Mord a stand in for every tank

Yes, Tristana in the jungle is a great pick for a jungler looking to try something new, or an ADC who just got autofilled jungle. Whatever your case Tristana jungle is a very fun pick once you get the ball rolling. She is an amazing champion both for ganking, and for securing objectives.

If you are in solo queue, the first thing you should do is type /muteall in chat, since your team will most likely already be flaming you for picking this. Now start bot side, red/blue buff does not matter since you need the two person leash if you want to keep up with the enemy jungle. After taking buff, if you started blue go gromp -> red -> raptos -> krugs, then get control on top side skuttle. This is the point where you can look either top or mid to gank, if neither opertunity looks like a garenteed kill, take top skuttle and reset. At this point you will have enough for a vampiric scepter and should clear the camps that you missed in your fist clear. If you start red go krugs -> raptors gromp -> skuttle (gank if you can, if not get top skuttle) -> blue -> reset for vampiric scepter and control. from here place control in dragon pit and use your w to clear krugs which should be up by now.

Mid game is where Tristana jungle really shines, and in the mid game you have three goals to ensure a successful game. the first one is Towers. If an enemy is pushed up in lane you can gank them and even R them into your turet to garentee a successful gank, however, if an enemy is missing in a lane, either because the're roaming or reseting, push with your laner and take a few turret plates, or even turrets make sure if the enemy laner is roaming, ping to let your other lanes know, and if they are going for an objective meet them there, this strat should only be done durring the nuetral game. Tristana is a great turret taker, her E and Q will shred any turret and leave both you and your laner with more gold. Your second goal is to secure objectives. You should be able to solo dragon after your second reset, assuming you don't get invaded or contested. Your third goal is to deny the enemy jungler, if you are good at kiting you should be able to 1v1 most junglers. Assassins may be more difficult since there entire kit revolves around oneshotting ADCs like you, but after you buy shield bow you should be able to fight back and deny them camps, objectives, and ganks. The key to playing jungle is not just to carry, but to deny the enemy jungle any chance to carry.

Tristana does tend to fall off the later a game goes, so your best bet is to get your team fed before they do. It sounds like obvious advice, but it's true. Don't expect to come back late game as Tristana if you don't have a team that can carry late game. Carry the mid game so that your team can win late. Stick with your team and don't try to take anything on your own, in the late game most champions can probably one shot you so stick to team fighting instead of 1v1s, or more than likely, the entire team diving you for a 1v5. Your goal now should switch off of fighting and more towards securing elder and baron for your team, then pushing with them to take any turrets that are left.

Thanks for reading my guide, if you try this build then best of luck to you, and I hope you have at least a little bit of fun. Remember to drink responsible and wear your seatbelt.