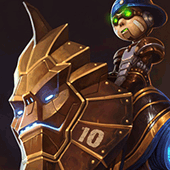 This champions are doing well in soloq right now

This champions are solid pick every time

EvoNinja7 (18) | June 1, 2020 3:29am
Great tier list. Just a few problems. Tryndamere is not on this list and he is one of the best topmlaners right now. Also,poppy deserves a higher tier since she can make a comeback from being beaten pulp by a garen or jax. I agree with most champions like Aatrox, but he is a little hard to play as.
1

Kayle. If you stay during the early game in exp and gold you will go 16 level and then you can carry your game. This is famous, the

Kayle's late game that when we have at our team and lose we put our hopes on her. So I think that she worths surely one tier up.
dr.mundo is one of the tankiest champions in the game and not only that she also have a loooot of damage!! His playstyle is pretty simple and easy. No you will say me that if a

Darius is against him he will can't farm so he will fall behind etc... Well yeah he will lose lot of farm but he can farm under turret with his q

Infected Bonesaw. And at team-fights he is so hard to be killed and that way you make your game easier.

Illaoi is if not the best then one of the best champion to get 1vs5 PENTAKILL. So, as you can understand you can carry lots of games.

Illaoi, once he get some items he can't be stopped imagine if he is fed. He can split-push very well and also shine at the team-fights knocking out the enemies one by one.

Nasus is a very good pick especially at low elos. He can't be stopped as well and low elo players don't know how to counter him so...you know.
Loading Comments...
Load More Comments