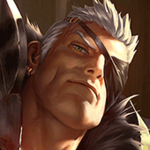 Who this person which has just arrived out of the blue thinks he is? He dares to give his opinion, build lists, might even create guides, and we don't even know if he's a good player at all! What's his elo? And his Y-channel? His twitch? Can't believe he doesn't even stream and make memes! Where's his own private life made public? And the worst: I bet he can't even 1v1 my Yasuo? ;)

Chill folks! 💙 I'm an old, old, old, old, old, old... old (to a point I'm starting to feel ashamed for) player - and Kudos babey! You're definitely right! Just because one has to use a cane now in order to walk, only for having walked down that road over these many years never automatically promotes anyone to the status of a good player - that and the fact that there's always room for improvements (⭐Ad astra! ⭐)


"My heart and sword always for Demacia."

My ordinary story of allowing myself to get angry, enraged, annoyed as well as being in awe and in bliss began by the time League client had chat rooms - boy, we were all inane kids, but hey it was fun at least! I think that I was one of those who leave the base without buying a single thing as well as not really knowing what I was supposed to do on that top part of the map, to me it should be the same lame basics of any other lame game: just kill the enemies and you score a win. Man,I was so wrong. haha My champion walked up there just because my offended and offensive mates ordered me so, "Kill stuff!" they said, despite firmly standing still and solid - ok, not that so - I often found myself surrounded and almost drowned by those overpowered evil enemy minions who alone were powerful enough to take my defender of Demacia - whatever that meant, - Garen, down. And I had no clue what should be done to win a match. Never could tell if we had won or failed before the last lobby screen. Everything so confusing!

In my defence I must inform that I came from tab-targetting MMOs, no one had told me I had to constantly move my champion around (don't even bother mentioning anything related to that high complex mystic thing of last hitting.) First time I was able to kill an enemy bot (if I'm not mistaken it was a Renekton) was such a joy! Although I didn't really get how I perfomed such heroic act, though what's done is done, and life goes on, I WON for the first time! Pride and glory filled my body when that invisible announcer who would usually only condemn me finally made her mind and went all about praising and shouted at the whole game that I got a kill, and on my very own! Some mates even congratulated me on chat and shared some tips: "Spin, Garen! Spin! Spin for your life!"

Ah yeah, by that time that pesky Lulu had just been released, and according to my vest experience, it looked like every single and each lane (including any corridor in the jungle lol) - no, mind you it wasn't URF nor any special mode, but simply my strikingly enhanced and enlighted awereness about the game - had been filled with unendless amounts of Lulus who would non-stop bully everyone, those tiny gals would troll even her teammates (not to mention feeding a lot as well, which even favored me, as people would forget that my Garen or Volibear existed hehe) On the subsequent champion releases I eventually noticed that it would be a pattern so unbreakable that it would and it really does live up up to these days. :3


"I don't need a buzzer to tell me when to start dominating."

From time to time I tend to go back under my hardly conquered large and protecting rock on Mars. Although before performing my so deserved return to the red planet (and to my dearest big red rock), something quite magnetically strong disoriented my course and I ended up even being able to get a ride on that hype-train Rito leaded through those unforgiving large hands which belonged to that good-looking yet terrifying insta-pentakill bloodshed-happy who would spray red all over the map named Darius.


The previous terror was then followed by a sexy and at the same time sexier, already loved and beloved,crazy and even crazier,strong but stronger,(enter any hype-increasing catchy words to your likes here,) desperately awaited to a point it even ached, a never satiated thirsty for carnage materialized in flesh and even more blood, Darius'bloody brother, name was DRAVEN!


"Welcome to the League of Draven!"

At the very moment he went live, to his own joy, Drave was finally free to strike the ultimate fear onto those pieces of meat, also known as "enemy" champions, and turn that boring slow road into his brand-new toy: bottom lane - his very personal corridor of death, mirroring what his older sibling had already been doing up there, on that disgusting "weak" lane. Much more than with Darius (maybe because he's too serious?), many, many folks found themselves in a sadomasochist relation of love and hate with Draven and his now overtaken League. His quotes were so catchy (that intolerable Qyiana has a lot to learn with him.) His moves were so artistic and liquid (Hush! Jhin wasn't even an embryo,) yet delivering torrents of devastating crit damage. Sooner rather than later, in parts yes, they had a point, players began to scream and flock on the forums and their frantic and deafening cries demanded for a prompt and harsh nerf on the blood siblings - even though just a very shy amount of players could properly manage Draven "axe throwing while axe catching" mechanics: at that time the axes seemed to land wherever they felt like, one would have to be lucky enough or an almighty display of mechanical mastery to catch them flawlessly while keeping thrusting those two sentences of death at the enemies - it wasn't that comfortable even for (some) pros. Axes routes were eventually fixed, but that crit-a-ton passive our loved Draven had been born with (which also had EVERYTHING to do with the fact the was one the blood brothers) unfortunately met its doom (mental note: such hysteria and then years later they release that Yasuo, and now Yone - Ok, I won't go hard on the latter as I'm fond of Yone, he rocks!)

Alright, after that breathtaking hype disappeared, next champions that showed up after Jayce (he was another unfortunated "OMG! SO OP! UNFAIR!(reads "he's too complex for me!") TOO OP! NERF HIM! NERF HIM NOW! NERF HIM OR RIOT!" lmao) were so uninteresting - like Diana and their physical clone Syndra having different abilities yet looking the same. They even removed Diana's crown to differentiate both gals. Inevitably you would often hear someone commenting: "Ah! I guess I got it now: that hysterical with those weird balls no one knows to play wears a crown, the other one who only facecheck brushes and feeds-a-ton has the sp*rm hair." In the meanwhile Rito aired a quite unimpressive soap-opera which main star was that new cat Rengar: released, ****-ton of damage, nerf, nerf again. ****, cat is definetly broken. Disable him due to bugs. Apply Irelia's formula on him! Cat rended useless, yet still bugging out. Factory recalled. Went for testing for the effing time. Disabled again. We give up, rework him. ****, too much damage and bugging out again...same ***** on and on which went hand in hand with that ****py blue skin of him: Cap bugging out. Disable cap options. Still bugging out. Blue skin removed. Blue skin back without cap. Bugs out again... *Sighs* Nothing like staying back under my comfortable and safe rock.

Rest of story I don't remember that well, odds are I began having a life (maybe against my will heh) and even made some friends. Surprise, surprise! They too played League! Yay! Time to team up and brave that weird frightening thing they call ranked-game.

First time, to my very surprise - or disbelief?, after putting myself to test I landed as ay Silver 1. Then Gold, although I firmly believed at the time that I had been hard carried. It couldn't be possible! Æons have passed by, but those memories of my poor Garen beated down by those obnoxious red minions were still fresh. Next year I couldn't play that much... again that annoying thing called Life, y'know?

The following year I decided to man up and face that elo game, I ended up at Plat 3, striding down to 4 and somehow managed to stay there till the end of Season.

"No fate, nor destiny. Only tomorrow."