+Rep | Report
cup, full, shut, the
Please note that none of the detective work is mine, this is all taken directly from a reddit post, I just wanted to inform any kind of person who isn't on reddit (altough surr@20 will probably post about this pretty soon as well).

So recently, there was a post about a new Champion going by the name, Ao Shin. The post made front page, I believe, and had quite a lot of buzz. The post was talking about the possibility of Ao Shin being some sort of "Gypsy Elementist".
I read through the entire post, and read many of the comments, and it all seemed really believable, but I wanted to look a but more into it, and I think I have found some things that may be of interest and relevance.
First off, an image was shown, showing only Ao Shin's feet and her arm, and she was surrounded by a few other Pool Party Champions, as well as other Misc Champs there for the Splash Art.
Ao Shin "Reveal" Image: http://i.imgur.com/Ls98NYN.jpg?1 [1]
The picture is set in a sort of, first person view of Ao Shin. The few things that came to my mind were the tattoos on her arm. The color of her fingernails. The strange, 'West Side" gang sign. And the Champions surrounding her. So let me break down what I think. The OP of the first post said she was some sort of elementist, and he gave links to some sort of proof, that made a lot of sense. I'll get back to this soon.

The first thing that came to my mind were how much two Champions in the picture stood out to me. Lee Sin, and Ahri. Lee Sin takes a pretty big amount in the picture, and he seems to be leaning in to Ao Shin, giving her a toast of some sort. Ahri is in the pool, but she seems to be mischievously staring at Ao Shin.
http://i.imgur.com/BlqFVsl.jpg?1 [2]
This got me thinking, "What do these two Champions have in common?" The answer? They're both from Ionia. A land in Runterra. Their world. From this, I started to look at other Ionian Champions, and I found a similarities in some of them, but not all.
Ionian Champions are as followed: Ahri Lee Sin Wukong Master Yi Karma Akali Shen Kennen Syndra Zed Soraka Jax Varus Irelia Janna (Actually from Zuan, but it's been stated that Janna has learned how to use her abilities and such from Karma, putting her in relation to Ionia)
Ao Shin has one main detail that sticks out. Her tattoos. They look like clouds, and the OP from the first post thought this hinted that she was an elementist. Maybe, but I took her tattoos in a different direction. Compared to some of the Ionian Champions, her tattoos are similar.

Similar tattooed Champions from Ionia are as followed: Karama Soraka Janna
Here are their tattoos compared to Ao Shin's: http://i.imgur.com/qbL8Zxz.jpg?1 [3]
I could stop there, but then I thought, "What do these three Champions have in common besides Ionia?" The answer? They're all Support Champions. Sure people go AD Soraka, AD Janna, and AP Karma Mid/Top, but they're known for being support champions. This leads me to the conclusion, that Ao Shin is going to be a new Support Champion. I may be wrong, but with what I've seen so far, I think I'm not too far off.

This next part that I'm about to say, may sound 100% stupid, illogical, and is most likely wrong, but I'm gonna go ahead and throw it in anyway.
Looking at Ao Shin's hand sign, and choice of fingernail coloring, it seems like she's really chill and relaxed. (Just like the clouds on her arm?) The only person that comes to mind when I think "Pink, and chill", is Vi. It's been hinted that Vi has a sister. In ARAM, Ezreal's Uncle, the human shop keeper, will say to Vi, "You look alot like your sister. Err... I wasn't supposed to talk about that..." He also says that he's traveled all over the world. So what's to say he hasn't stopped in Ionia, and met Ao Shin, who may be Vi's lost/forgotten sister?
So the last part may be a bit of a stretch, but I'm pretty confident in the Ionian Support part. Comments?

Edit 1: KARMA* Leave me alone!
Edit 2: Someone in the first Ao Shin post brought up faces in the clouds in the pool party splash art. I looked back for it, and I think I found it. May be another hint to the clouds on her arms, or we're all trying too hard now...
http://i.imgur.com/JqqArnq.jpg?1 [4]
Edit 3: A link relating to Ao Shin, with cryptic talk from the designers and such. Thanks to /u/pulp438 [5]
http://www.reignofgaming.net/redtracker/topic/103327-who-is-the-new-champion-in-the-2013-pax-prime-pool-party-poster[6]
Comments (5) 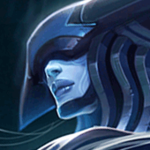 Kinen (27) | September 5, 2013 5:46am
Other way around, Karma received magic tuition from Janna, although that was pre-rework. Karma's new lore has no apparent connection to Janna. If anything, Janna is more associated with Piltover than Ionia.