It's time for the Midseason 11 Guide Contest! Create or update guides in the following 3 weeks for the chance to win up to $200 in prizes!

Here my games after no lifing :)

thejozster | March 27, 2013 4:02pm
I really loved the guild, but I didn't really like Statikk Shiv. I think that Blade of the Ruined King. I think that it's active is extremely useful for killing tanks, and kiting the enemy. I also like the old fashion Phantom Dancer. When I'm using Statikk Shiv I feel like it's lightning doesn't really deal enough damage to make it worth it.
1 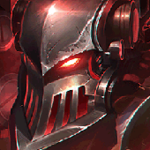 Tiemun | February 21, 2013 2:00am
Awesome guide, especially the build was really helpfull. Also I was using arp marks until now and most of the time it's the farm where I lose(win on kills though). So I'm gonna try to change that.
For the rest I'd really like to see how you play vs certain match ups and what support you preffer.
The hardest one is in my opinion Nunu & Caitlyn. The range is killing me, besides early game nunu who keeps e'ing me from the bush is so annoying, and I cant really stop him except run back resulting in farm lost. If I shoot him it hardly does dmg and he just eats a minion afterwards.
I'd like to hear your idea's on this.
1

Bearded Titan (1) | January 24, 2013 9:17am
Went 15-4 in a normal game and dominated the entire game using your build. Definitely keeping these items in mind for future games.
1

Haedrix (24) | January 20, 2013 8:04pm
You stated that you preferred flat AD Marks due to the comfortable last hitting they provide but you don't have any Mastery Points in Butcher. Wouldn't it be mathematically more beneficial to run the AD Quints + Armor Pen Marks and just take 2 points out of Havoc and put them into Butcher?
1

Quickdraw. I knew about it stacking with

By the way the side shots can't crit right? And what do you think of - this question is probably going to come up sooner or later -

Yeah, you're correct side shots can't crit. With the latest patch Black Cleaver is not as cost effective as other items you can build and doesn't bring as much utility. You can still build it for fun but it wouldn't be the best choice

Pølsemanden wrote:
I have 2 questions:

Why no arpen marks? i thought those in conjunction with ad quints gave the best damage against champs throughout the game?

Soo sometimes you end up without infinity edge oO?

Ad marks provide the extra damage you need to last hit comfortably and still trade at about the same rate. It gets to be pretty minimal damage changes between the two runes so I prefer running the AD marks.

[deleted] wrote:
why zerkers so early?

It really depends on how long you stay in lane and how much gold you have when you back. If you can afford buying a straight up BF and Boots of Speed, go for it. Buying Berserker Greaves gives you a overall damage boost, and more chasing/escape power.

Maverin wrote:
Very strong guide and information. Your core and opening build is really showing where the new meta is going and I definitely appreciate that information being put out there. However im not sure about the dorans blade in the first b, I would think that going into a vampiric, and berserkers might be better because by that point in the game your attk speed is very low despite quickdraw and that is what allows graves to come out on top in duels, apart from his point-blank buckshots. the extra attk speed may be better than some health and attk damage. Also the extra attk speed will build his passive up faster. This is all my personal opinion and im not exactly pro and u are so whatever :P Also, I would love to see some support matchups for graves because I have no idea which support synergizes well with him. Anyway, good guide, awesome info, +1, hope to see u kick some *** in season 3.

Berserker Greaves is always a good buy early, unless it's your only item. It all depends on the amount of gold you have when you back, if you can afford to buy boots+vamp which is about 1300 gold then go for it. Most often you arrive back at base with around 1000 gold which means you should purchase the vamp+doran.

Downvote for my solo queue rating? :(
1