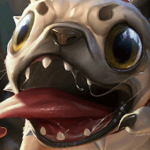 Graves is a high-damage caster-based Marksman who is widely known for having the most powerful burst out of all the Marksmen in League of Legends due to his Q-W-R combo, comprised of Buckshot, Smoke Screen and Collateral Damage. His passive, True Grit, also makes him one of the tankiest Marksmen, and his Quick Draw ability allows him to either quickly reposition, chase or escape in team fights. He is short-ranged, however, and could easily fall into ganks if not played correctly.

Has the highest burst in the game with his Buckshot-Smoke Screen-Collateral Damage combo.
Able to reposition, escape or chase with Quick Draw.
Gets tanky stats in fights due to True Grit.
AoE damaging abilities make him great for team fights.
Can waveclear easily.
Smoke Screen is excellent for denying vision and slowing opponents in choke points.
Quick Draw allows Graves to jump over certain ledges and walls.

Lower-than-average range for a marksman.
Relies a lot of his burst combo to kill an opponent.
Mana-reliant for most of the game due to his kit.

[11.4] EUW CHALL | How to DOMINATE the Jungle as Graves
By Exoslol