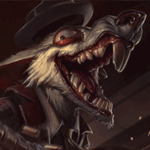 EDIT: this is the worst guide i've ever seen
so much so it's not even a guide, you just copy pasted her Lore and called it a day.

you don't include boots in your "guide", which you could at least give the reason for
you don't include one of your core items in ANY of your final builds
you don't give any insight into how to even begin to play her, what's your strategy, your matchups, and so on and so on..

i'll give you the benefit of the doubt and say maybe this is just a draft of some kind that you're saving for later or smth but still, yikes.
2

SnakeTastic (5) | September 13, 2020 5:51am
hey i dont even know how to reply to this other then sry im ******ed idk how i forgot to put boots and sunfire cape in my builds and to mention this is a draft i fixed some of the other issues too sry for the inconvinience
1