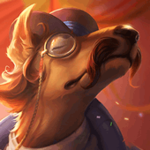 By Arch Aspire
Disclaimer
This is not a serious build. It was never meant to be a serious build. You should be laughing at how horribly the words Warwick and Support go together. 'So why make this guide?' you maybe say, and to that I respond... I dunno. I felt like it. I will tell you where this build will work though: Co-op vs AI... so it has some use and deserves to exist... I think. If you want to imagine what the build is truly like, just imagine turning a dog-fight champion doggo into a friend for your baby. Not gonna end well.
With that out of the way...
Introduction
Hello, and welcome to the "What is wrong with you?!" or "Go get some help" warwick support guide, where I will improvise my whole way pretending like I know a thing or two while I sit in the corner every night reevaluating my life decisions. This guide will basically teach you that there is indeed a way to play warwick support, albeit not a good one. If you insist on learning the ways of this terrible build, then keep in mind these major points:

Okay, got that? Alright, now onto the details I totally didn't make up on the spot.
str() for Passive
There's nothing much to say about this one, other than use this passive not as a normal sustain tool, but rather a "I refuse to die" tool. Be as annoying as possible. The mental game is important as well.
Q for Quickly!
Warwick's Q can heal, but most importantly it can launch him like a slingshot. The latter bit is the more important bit when it comes to Warwick support. Why? Because of the E-Q combo (I call it the equalizer). You E first, then long press Q. If you locked on and launched ahead of the enemy champion, you can fear the champion potentially towards your ADC, who can probably follow up with a burst of damage. But if you are too far away, you could always catch up by yeeting yourself forward using a minion as your slingshot. However, you should also keep in mind to save Q up for either a further engage, a tactical retreat, or not dying for a few more seconds instead of spending it on damage.
W for Wait for me!
This skill is completely useless in his support kit... just kidding. This skill really helps out when you got yourself a bruiser ADC rather than a burst, as the extra MS gives you the leverage you need to catch up on that one champion who refuses to die. As the game approaches mid-late game, the active part of the skill starts to shine when you need the doggy to launch himself at the enemy at illegal velocities. Due to its near identical cooldown to the ult, you may want to always use them together. Don't pay attention to the attack speed part, that part isn't useful to you anymore.
E for Essential
The most important skill in Warwick's support kit, at least with this build. Although you could take Q first(if you got pokey enemies), you must always level up E before level 3. Early game this skill serves as your one chance to impress the other support champions, by causing them to slowly sneak away from you as you fear them for a whooping 1 second. Yeah the duration is very short but it's still better than nothing. This skill also serves as a disengage tool if your ADC or, more likely, you end up in a bad situation. It could also help with the minion waves as fear can delay the enemy waves and allow ally minions to catch up before they even have a chance to step into the turret range.

Towards late-game, this skill's fear becomes not so useful, but fear not(get it?), there's damage reduction! This damage reduction will allow you to take one or two tower shots for your teammates, and although not that useful, can still be helpful when the enemy is one or two shots away from dying. As well as that, there are two ways to enter team fights, each for a different situation. The first is using E as the enemy champions focus on you. Being able to be the damage sponge can really help your teammates out, especially if you're tanky enough to survive a few bursts. If not, there's still the other method, which is E, then R. This is the perfect combo to disperse a crowd, as E activates as soon as you land your R. If your teammates are quick enough, they could take advantage of the situation and target the one you landed on, and anyone around wouldn't be able to counter for one second.

Real talk though, your most important skill is a CC that lasts for 1 second and sometimes doesn't work the way you want, do you still want to go on with this?

R for Remain still will ya?!
Okay last skill, R. R is your main engagement tool, but that doesn't mean you should throw the doggie at a random champion whenever the skill goes off cooldown. First, determine if your ADC can follow up on the hard CC you might do to the poor enemy champion, then determine whether your ADC is in the mood to follow up on the engage. If any of these are no, then save your R as it could serve as a great getaway vehicle. As long as you have R, you have a free Flash, but let's hope you never have to use it like that.

As I said before, there are a couple combos you could pair the ult with for maximum engagement. First is W-R, W for the movement speed, R for the yeet. Easy to understand. Next is the E-R(or W-E-R), E for the dispersing a group up, R for the single target. You can see this as an AOE CC engage. And finally, one that I haven't talked about, R-E-Q(or W-R-E-Q). R-E-Q is something that might come up once or twice, but will rarely be used. This combo should only be used if you're late to the team fight party, and need to contribute quick. R allows you to quickly get there, hopefully enough for Q range, and the E-Q combo is what you'd expect. Keep this combo at the back of your head, you'll almost never use it.
Where's the items?
So I started this build before the whole item change thing, and now I have no idea what items to take. Further experimentation is definitely needed. The items set need to be able to allow Warwick to "catch up" (spoiler: he never will) with the actual supports, while being able to protect the doggie from beaten up like a typical hollywood movie protagonist, and at the moment I have no clue what those are. So check back later if you are still interested in this joke of a build.
Conclusion
You still here? You are one persistent summoner. If you haven't figured it out yet, this is a joke. Period. You should never attempt this build outside co-op vs ai. If you want to support, warwick is clearly not a good candidate. He'll chew up your mouse and keyboard and pee on your gaming laptop. If you want to warwick, support is clearly not a good candidate. It'll miss all of its trick shots and flame you in /all chat. This build won't even work if you don't have an ADC who's in the mood to respond to your engages. If you want to play league of legends "as it was meant to be played", try a different build. But if you're in the mood for builds that shouldn't work but works because you're up against AI(I'm looking at you, attack speed Yuumi(but maybe I'll do a joke guide of that one day)), try this build out.

Arch Aspire Warwick Guide
Vote Vote
The Warwick Support build absolutely no one asked for
Disclaimer
Introduction
str() for Passive
Q for Quickly!
W for Wait for me!
E for Essential
R for Remain still will ya?!
Where's the items?
Conclusion