Show more awards
Posts:
3801
Joined:
Dec 6th, 2011
Rep:
Esteemed (313)
Profile Blog
Permalink | Quote | PM | +Rep May 4, 2015 9:26pm | Report
Welcome to my Ranked Thread :) I'll be using this for documenting my progress in soloqueue. I firmly believe that the 2nd best thing aside from practicing is analyzing your own play, and i'll be doing that here. If you're looking to improve, it might do you good to follow along with some of my analyses: You might just get something out of them xD If you have any suggestions / recommendations, please let me know! I'm very open to both criticism and suggestions to make my thread more enjoyable to follow

I'll try my best to include every game, but I'm awfully forgetful, so I'm not holding myself to any particularly high standard when it comes to the consistency of posting games; Additionally, if a game is a stomp and there isn't much to learn from it, I might choose not to include the game.

The goal for this season is to reach top 5,000 in NA, while also working on diversifying my specialty roles. Some things that I'll be looking to improve are: My consistency in Top lane performance, improving my CS in mid lane, learning how/when to perfectly roam in mid lane, being more committal and aggressive in mid lane, improving my gank spacing (+rep if you get the pun) when jungling, and playing less recklessly when ADCing. I don't know exactly what I need to do to improve my support play, so I won't comment on that just yet. Lastly, I'll be looking to diversity my champion pool for all of these roles. 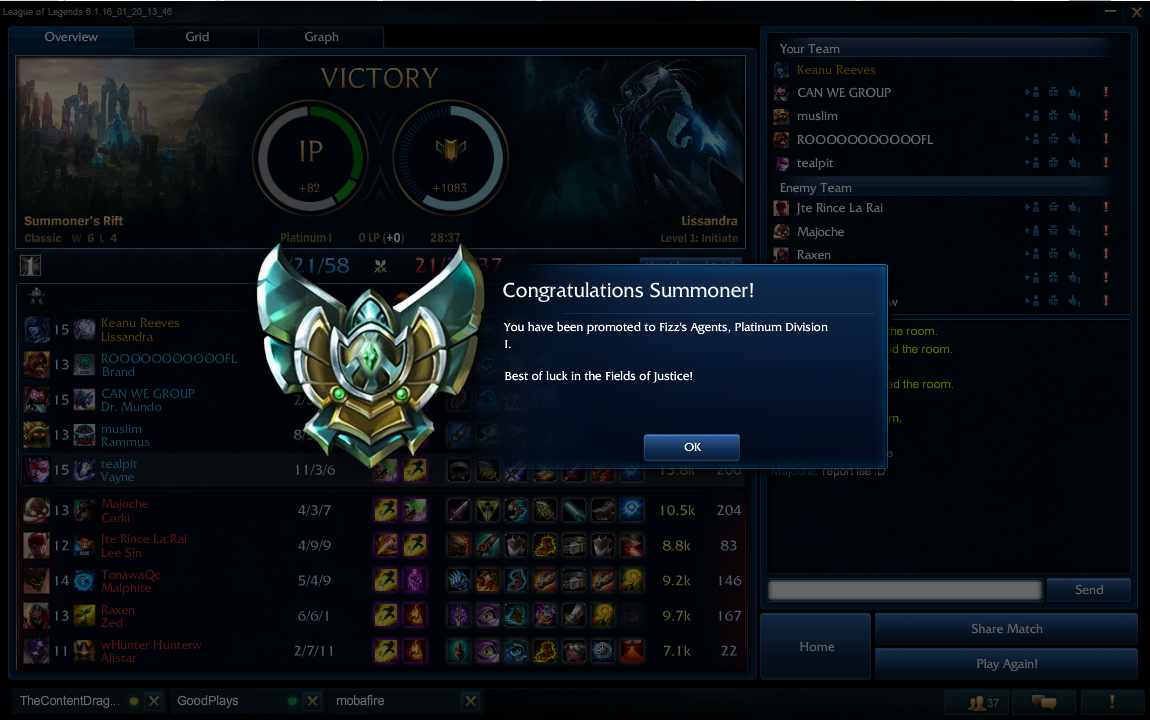 This formatting was ripped from Wayne3099's Ranked thread. I'd like to give him a big thankyou for letting me use his BBcoding! 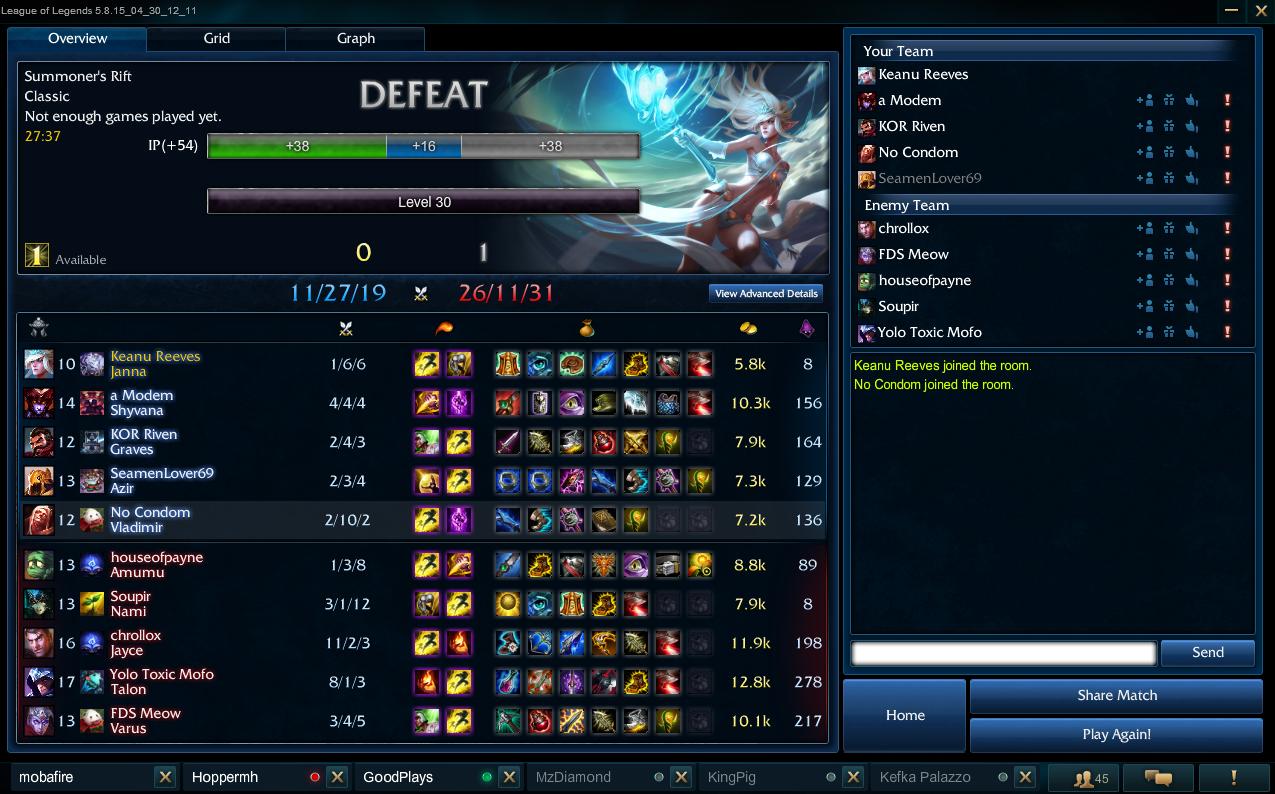 We had a vlad that stole our shyvana's top pick without telling us. He didn't play too hot :< I think at one point he said he was high LOL
Anyways, Shyvana was forced into jungle, and she did very well carrying us. Graves really respected the varus + nami matchup, so my aggressive playstyle didn't really sync well with his propensity to farm and take free AAs. I asked him to all-in when we hit 6, and we actually did pretty well, acing them at one point. I was quite happy with my janna play there, as I was able to save shyvana and help her secure 2 more kills, so there's that. We didn't have enough map pressure to really make use of shyvana's good plays.

There was one really embarassing point where I tried to flash ulti jayce , but I forgot that my

Monsoon was on cooldown from an earlier skirmish, so I ended up just

Flashing to my death LOL.

An unfortunate, but nearly unavoidable loss. I'll see if I can have more games come your way 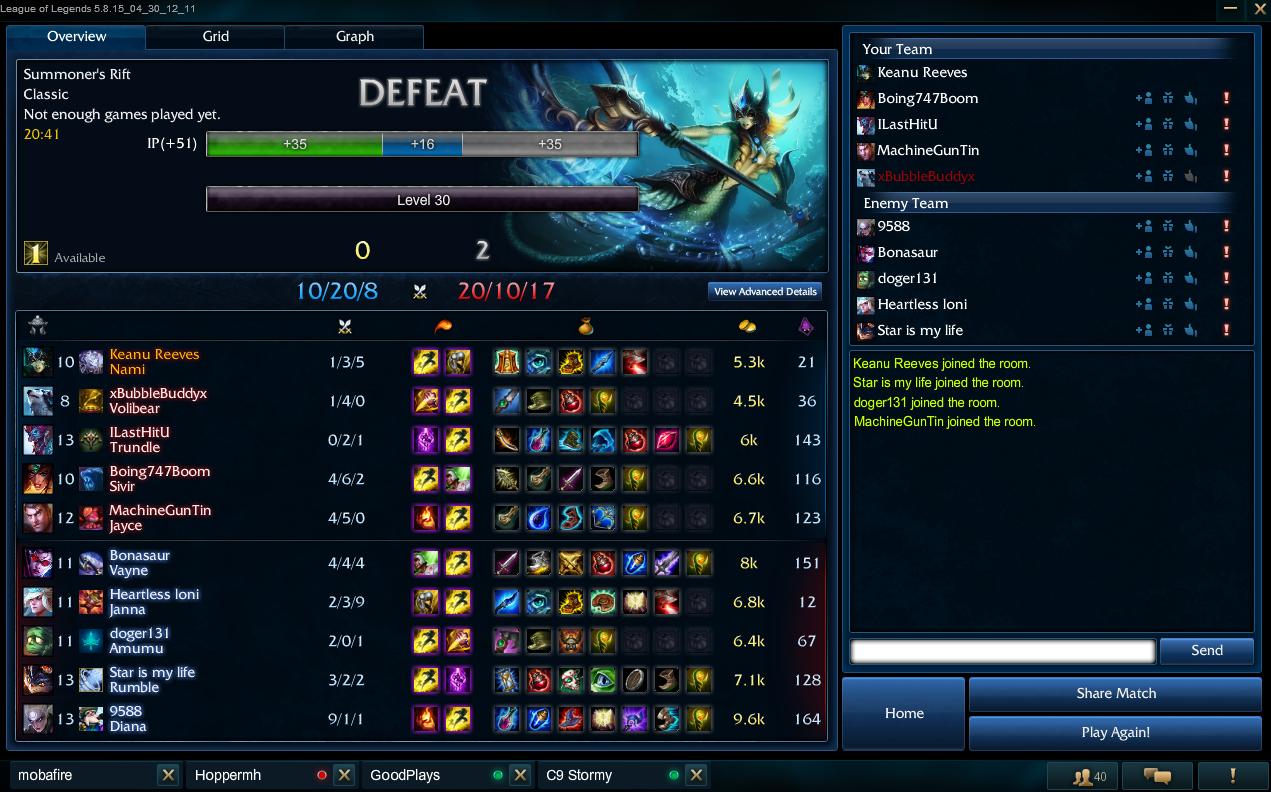 A little disheartening of a game, to be honest. My sivir told me that she would play aggressively, and then took free autos from janna for all of level 1. I got vayne down to 30% by the time we hit level 2, but janna got sivir down to 30% as well, which is kinda sad tbh. Anyways, they went aggressive on sivir, and instead of fighting a duel that I think we would've won, she tried to run away, and ended up burning flash and dying. The sivir said that she was frustrated that I was autoing minions, which was pretty funny lol.

Volibear tried earnestly to gank for us, but it just didn't end up working out; Janna had a lot of stuff warded, and we didn't have a good way of clearing the wards.

Volibear got a successful gank off in our lane, but a good TP from my opponents top laner without follow up from our top laner forced a 2v3 that we lost.

Sivir started harassing the volibear, and the poor guy ended up ragequitting. 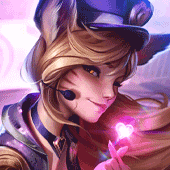 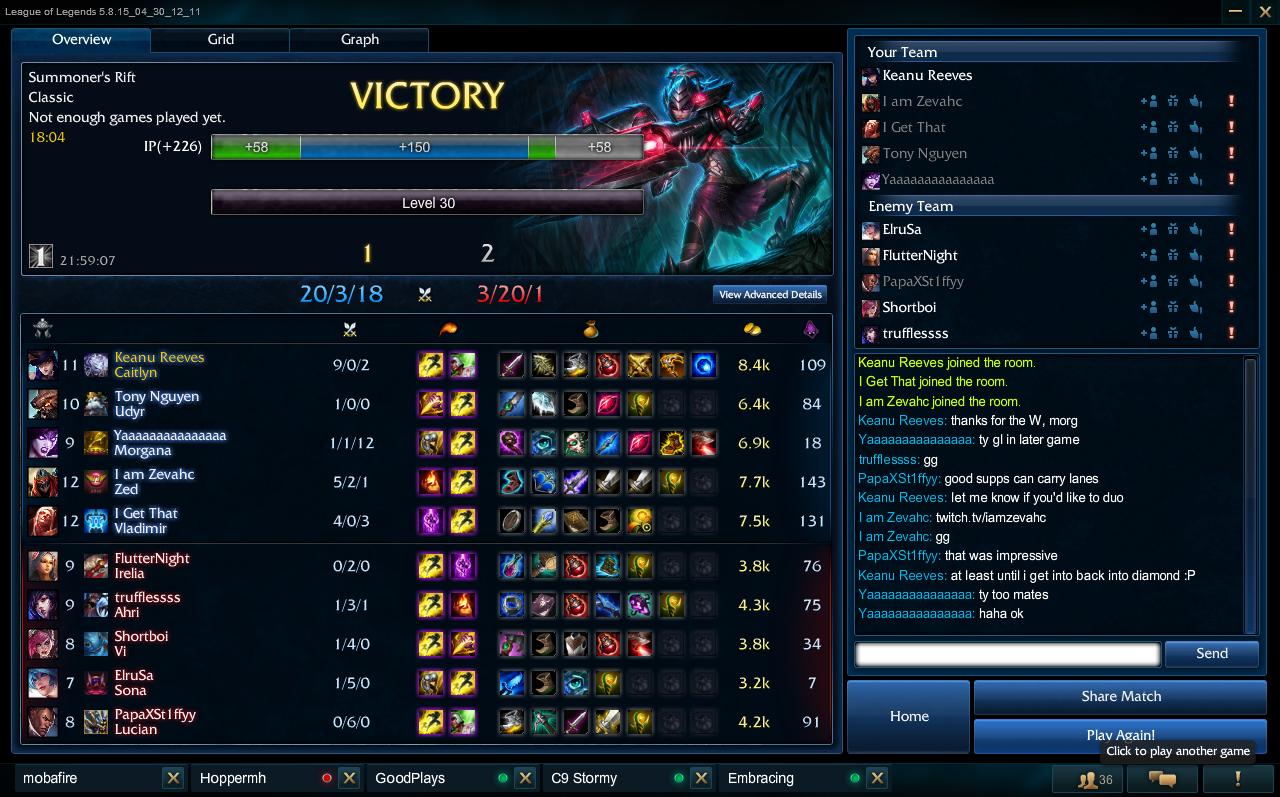 
Total stomp; I must say that playing carry roles is working out a lot better than when I was playing support roles, even though I main support. My

Morgana was quite aggressive, right from level 1. With her autoattacking lucian and sona so far out, and some nice bindings, she managed to chunk both of thel to below 40% by the time we hit level 2. A nice LoS binding allowed us to get a kill on sona. Left at like 300 HP, I outplayed a gank from vi, that ended up getting me a 2nd kill around the 5' mark.

Morg caught lucian and sona out two more times later, and i ended up getting

Thanks for the sig, MissMaw!
Wayne3100
<Retired Admin>

Thanks to MissMaw for the signature!
Maintained
<Stalker>

Special thanks to iPulsefire for the signature!
Thalia Kael
<Inhouse Addict>