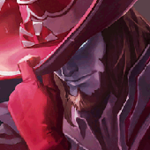 So to begin with I'm not a Challenger or anything but I've been playing Kindred a lot and know a lot about her.
So for the build I would recommend going for Nightblue3's standard AD/AS build (A challenger main jungle in NA)

Starting off with the jungle item, I would recommend going Warrior since devourer got removed (You can still go bloodrazor but I'm won't recommend), you have the choice between Skirmisher's Sabre or Tracker's Knife if you seek more damage with the red smite go Skirmisher's Sabre if you seek more vision go Tracker's knife (which I highly recommend)
Next you should buy Berserker's Greaves (Or Boots of Swiftness if you chose Bloodrazor)
Third item depends on the game,if you're against a high burst AP or AP assassin you should take Maw of Malmortius, if not just take Youmuu's Ghostblade.
Next you have the choice between Phantom Dancer and Runaan's Hurricane (If you seek movement speed take PD, if you want faster fervor stack(more damage) just take Runaan's Hurricane)
Next item depends on the last one, if you took PD first take Runaan's second if you took Runaan's first take PD second
Now the last item really depends on the game, if they have some armor get The Black Cleaver, if not you got 2 options.. whether you take Guardian angel(if you're a little bit behind) or Infinity edge (if you're not behind)
Now last thing I recommend doing is to sell your boots for an item since we can't upgrade boots anymore.. So if you got cleaver get IE and if you got IE or GA get Cleaver.


Now for ganking there isn't any specific things just gank when the lane is pushed by the enemy laner or when your teammate is getting ganked (Make sure you mark the enemy laner when you gank)
And about early invade it depends on the enemy jungler if he's squishy it is okey to gank.. but if he's a mobile one like shaco or something you will probably die..