Lee Sin (only m4), but a while ago, I saw a lee sin guide on youtube that went pretty in depth, and it seems like it is a viable guide, and it can probably help you figure it out.

Here is the video 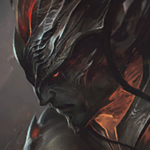 Side note: You have an option between Stalker's and Skirmisher's, personally I like Stalker's for the slow but it depends on the player. Same goes between Boots of Mobility and Tabi/Mercs.
Build I like to go:
Stalker's w/Warrior, Tabi/Merc, Black Cleaver, Dead Man's Plate, Ravenous Hydra, Guardian Angel

Honestly, the final build depends on you as there is no perfect build for any champion. Like FupiDupi said, Lee does fall off later in the game so the early-mid game is when Lee truly becomes a playmaker. Hope this helped!
1

Lee falls off the longer the game goes on and does less damage so he's only strong early game then he has to build tanky.
Loading Comments...
Load More Comments