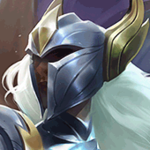 Pliisti (3) | January 6, 2018 11:24am
My advice as a support player is to let your support do the heavy lifting, tell them what to do if you have to, but let them go in first and set you up. It is much easier as any character with a high damage build to delete varus, or any late game carry, when he is unable to attack due to your support's cc. There was a game the other day when the enemy team made a late game baron call, I used Alistar's WQ combo to engage and their midlaner mage and adc were dead before they hit the ground due to my team's follow up. We then took out their tanks and won the game. Take advantage of setups by your team mates and use smart positioning to prevent the enemy team from setting you up. There was a second game where I played as Leona and our top laner played tank gnar. The fights where he used his mega form to engage we lost, the fights where I used my REQW combo on the enemy carry we won. Whatever you can do to outplay varus it will never be as effective as going in on him while he is disabled.
1

As a marksman, the best thing you can do is get lifesteal so you can heal up after being poked.

Guardian Angel are two armor options but there's not much you can do beyond that. Just try not to get hit. Get a

Quicksilver Sash if you're getting locked down by his ultimate.

As a mage, you can get

Banshee's Veil to block a single Q or you can get

Zhonya's Hourglass for some armor. Honestly the main thing to do against Varus is to dodge the skillshots though. As a mage you should be able to kill varus pretty quickly if he steps within range. Your job is to deal damage so don't worry too much about counter-building enemy carries and just try to position well.
1

PsiGuard (1495) | January 5, 2018 9:03pm
Hmm, well attack-speed Varus just deals pretty consistent DPS. As a carry, you should really have to worry about him since he won't be in range of you most of the time. If you're a burst mage you should be able to kill him before he has time to right-click you down. If you're a Marksman, you should probably just let your teammates take care of him.

The "counter" to the attack speed build is to hit him with Crowd Control basically. It's kind of like playing against a Kog'Maw but not quite as oppressive. If you're in range of him, you have to focus and kill him pretty fast. Otherwise you just stay away from him and focus his teammates.

I don't think ADC vs ADC matchups involve much counter-building since you'll both be in the backline and not interacting very often. The only exception that comes to mind is that I've seen