League of Legends (LoL) Question: Why is Jhin bad?

Lethality items aren't in too bad a spot right now, but there are a lot of slow games at the moment, often involving some beefy frontliners like

Alistar, so Lethality ADCs don't get to push their advantage as hard as in scrappier metas.

I think Jhin is fine in solo queue and/or in games where the enemy team comp isn't super front-line heavy and safe. He did just get a small buff to his ultimate recently which is pretty nice. He's just not a hypercarry, so he can't fulfill the same role as some of these popular scaling ADCs like

Xerath support, both of you running

Fleet Footwork, and it works great.

Zilean would pair well with him.
1 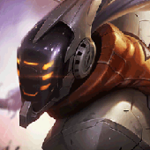 WitsEnd | February 23, 2018 11:19am
I think Jhin isn't weak at all. He might fall off in late game, yes, but his laning phase is awesome. He can farm early with his Q and his W is one of the strongest harass spells in the game. Paired with an aggressive support like

Brand you are almost guaranteed to win lane. However, as it was said above, he's not a hypercarry. Jhin is a strong laner, but his late game is weak. That's probably the reason that his winrate is getting lower compared to stronger late-game champs like

Ezreal. He's currently off-meta: a small buff and he'll be back at the top.
1