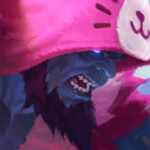 Some champions will be listed more than once if they have other viable builds. Hover their icon to view which build is being represented. All champs are listed in order of top to bottom, left to right within each tier.

First off, don't build boots ever (unless you're running predator or going tank in which case Ninja Tabi are insanely good at reducing basic attack damage).
Secondly, jungling is fine as long as someone on your team is cool with a 1v2 lane. You're definitely gonna want someone with ranged waveclear on that lane.

For now, the previous tier list is pretty accurate: https://www.mobafire.com/league-of-legends/tier-list/arurf-2019-tier-list-1660

If you find some wonky build that just works for any of the lower tiers, lemme know so I can see for myself and update this.

In this new ARURF, Transcendence and Gathering Storm have been heavily nerfed. So now you're free to take whatever secondary runes you feel like. I highly recommend the Legend runes, Triumph, Coup De Grace, Shield Bash and Revitalize.

Flash + Exhaust - Unless otherwise specified per champion, these are the uncontested best by a mile.
1

Indisputably the best picks in URF

Extremely good but not quite as strong as the God tiers

You can definitely do well on these but you're handicapping yourself

But they're definitely not recommended