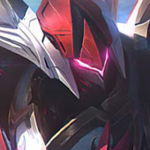 Runes: Looking to protect yourself ?

Not a real threat but it's Blitzcrank so ...

Like against Xerath, prepare yourself for a bad game

Kalista's R is your best friends ! You can jump to your foe en taunt they just after. That's a lot of CC !

Kalista's R is your best friends ! You can jump to your foe en taunt they just after. That's a lot of CC !

By HARMand
Introduction
Okay, let me introduce myself quickly!
I am HARMand and have been main support for a little while. So far, I love this role and the resulting teamwork (only when my ADC is a mate). Now, I also have to admit something to you: I LOVE playing off-meta. Or rather, I hate playing too much meta. So I do strange tests like for example, Rek'saï / Master Yi supp and many others.
Then one day I ran into Shen. I'm not a fan of his basic looks, his phrases and his skills don't appeal to me. But when I try it with my team, it's love at first sight! Since then, I only have eyes for him and his ****ty voice in FR. He's the champion I've played the most this season, so far.
Now, I choose to make a guide 'cause "Why not".

Overall
Shen is a tank and he can taunt. This is all you need. Okay ... It's true that he also has enough to block the damage of enemy AA and that he can hit a little bit in% of HP which is not crazy, but it is still useful.

Pros :
- Tanky
- Mobile
- Save your friends with your R and be acclaim
- DarkSasuke

Cons :
- Low Damage
- Pretty squishy in early
- Miss to save your friends with your R, die (or not) and be flame
- DarkSasuke

Now you have to understand that Shen is a fairly passive support at the start of the game. He has big cooldowns and can die easily on an inattention.
The goal is to turn around the ADC to protect him with Guardian and, if he gets engaged, dash with E on the opposing ADC in order to give your ally time to flee. Normally, no one should die on your side. However, that dash response is a great time to fight back and attempt to scratch some HP.
However, you have to be careful! Hitting an enemy with Shen having used his Q is risky because the damage is much higher than you might think. You might steal the kill from your ADC or Jungler if you're not careful.

If your ADC is not on the lane but you are

Stay behind your turret and use your E (or a Flash+E) to make the turret shoot them ! (Ok, here it's a bot but it's to give an example)