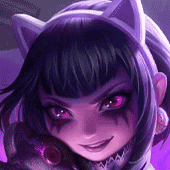 Anyone who can dash will make you sad.

Anyone who can dash will make you sad.

Perfect ult combo. DO NOT sleep on this combo.

Perfect ult combo. DO NOT sleep on this combo.

By moritea
Why did you make this guide?
I am a hard-stuck bronze mid/support main, and I'm here to tell you all those high elo guides don't apply down here. If you're like me, you know life is hard being stuck in bronze. It's a cold, lawless land and no one on your team is ever going to do what they should. It's up to you to carry your team, and this is why you need my tried and tested low-elo Neeko gaming build. Here's how it works:

- You must roam for scuttle crab. (This is non-negotiable)
- Help with dragon.
- Ult everyone always.

Scuttle Crab
This is by far the most important part of this guide, as it is hardcoded in the game to give you a free win. Have you ever been chilling in midlane at around 4 minutes when you suddenly realise your team is down one kill? Well my friends, that is because your jungle just lost a fight over scuttle. This problem could be solved in one easy step! ROAM FOR SCUTTLE.

In my days of being stuck in bronze, this has never not gotten me a free kill. Not even once. Just walking to give your jungle a kiss on the cheek at the first scuttle is the kindest thing you could ever do for them.

NO you can't rely on your top laner to roam down to help out your poor struggling jungle, when they locked in top they uninstalled their minimap. It's all you baby. All you need to do is W yourself a clone, sprint over, land an E and you or your jungle win a free dinner meal. If you're luck, your mid lane won't realise what happened until it's too late - and he'll walk over once you've dragged his teammate across the river floor. Then, you and your jungle get dessert. Now your enemy mid and jungle hate each other, they're spam pinging in rage. Their jungle now refuses to gank mid again, you win lane.

There is only one way this can go wrong. If your mid lane decides to roam at the same time as you it automatically becomes a sweatfest. My only advice is LAND EVERYTHING and also DODGE EVERYTHING, then you should be fine.

Laning Phase and Dark Harvest
At this point you may be asking, why Dark Harvest? My friends Stonks (Dark Harvest) is the easiest way to ensure a win in low elo. No matter how much your team dies, if you keep racking up those stacks you will carry. Plus, the sound when you collect one is just so crisp.

During laning your first priority is staying alive and collecting stacks. Don't tower dive for that kill, I promise you it never works. Just keep poking, force them to back - play safe! Mid lane isn't where your kills come from.

If you can, early buy a dark seal - even if you have no kills. I know it's scary, but you will benefit more if you have it early. If worst comes to worst, just sell it. No biggie!

Your second priority is ROAMING. If all goes well you should get your level six just in time for dragon, go help! Look at your map, see who needs help. Don't let your top lane get flattened by a snowballing Darius, watch for when your jungle plans to gank and go with them. If the enemy botlane is pushed up, go! Kill. Roaming isn't just for Katarinas. Chances are that by doing this you are going to rack up kills like crazy, because nobody expects it.
Clones and Copies
Copying and cloning in my opinion are the best parts of Neekos kit. It feels scary to use but that's exactly what the enemy team want you to feel. Just use it! Try those tricky strats, what's the worst that can happen? If you arent cool and crafty like me I've included some sneaky neeko moves I've learnt in my time.

I'm just a little low health guy!
Turn into a very low or dead team mate. Yes, even dead ones work. When you turn into a dead champ, you will appear super low health. "But Mori," you ask "If they're dead, the enemies will know I'm actually Neeko!". To that I say, no - no they won't. You'd be surprised how often this works for me, apparently no one playing this game is aware of what is going around them (at least in my elo). Turn into your sickly friend, bait enemies and get an easy kill.

My jungle is here to save me!
This one requires more effort. When running away from an enemy, run into any bush you can see then quickly turn yourself into your (hopefully) full health jungle. Then, send out a clone of yourself (which should look like your jungle). QUICKLY turn back into Neeko and run away. With any luck the enemy will think your jungle came to save you and back off.

Low health Neeko fleeing
This one takes a lot of courage but I believe in all of you aspiring Neeko mains. When you're being chased on low health with barely any mana, there's only one thing you can do. As you are running from the enemy, send your clone in the direction you are fleeing - then you yourself run towards the enemy. Hopefully, they will believe you are actually the clone and keep chasing your double, letting you escape.

Giant enemy Darius
This one might not be good for you, but it is good for your team. When walking around in a group without the most fed member of your team, turn into them. This will make enemies a lot less likely to engage your team, as they think they will lose. This works less well when you're alone, as it makes them want to kill YOU even more.
Game Winning Ult
This is where Hextech Rocketbelt comes into play. Now I'm not sure any one other than me still builds this item, but trust me in low elo this is NECESSARY. My advice is bind it to your V key, that way you can always hold your thumb on it for when you see a group of more than 2 enemies. The basic combo is flash, rocketbelt, ult. Stick the entire team to the floor and watch them cry and scream, "Bro Neeko was no where near us how did we get ulted??".