~ Jungle Lillia ~ The guide they don't want you to know abou

~ Jungle Lillia ~ The guide they don't want you to know abou

paulmold | July 28, 2020 5:43am
Nice guide. Thanks for it.
I just have one question. Don't you think Celerity would be better than Transendence?
You gain more movement speed.
2

averageJerky (1) | July 28, 2020 4:56pm
I've switched out Gathering Storm for Nimbus Cloak, but I still think transcendence is very important as that extra 10% you get will keep your ultimate on a respectably low cooldown. One of the most common complaints I've been hearing is that "her cooldowns are too long" and this helps out with that.


Try either out for at least 3-5 games each and then go with what feels best to you. (I highly recommend Nimbus/Transcend though.
1

paulmold | July 31, 2020 1:18pm
Thanks for the response. I was just curious of your thoughts. I will play a bit with her runes and see what's the best option for me.
3

Krakenbeard | July 27, 2020 11:26am
I recently found out that you can press Q then W at the same time, I dont know if this is already figured out but I find it really great
2

AxNae | July 26, 2020 1:04pm
Add camille to the list of champions lilia synergizes with; me and my friend played camille x lilia and destroyed 5 games in a row. we always got 3-4 early kills on top lane alone. IDK why but it's just such a good combo of champions. We entitled it "camellia combo".
2 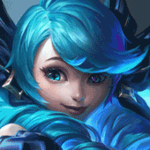 TowerShieldDude | July 23, 2020 3:11pm
Hello! How do you feel about going deadman's plate after runic echo? Than building into liandry's and Tank items? I've explored her indepth with the practice tool in hopes of theory crafting builds. I've found that she has extremely low ap ratios. In the 30-40%, so instead of building large amounts of ap.

I just use Echo and Liandry to apply and keep up the passive burn of dream dust! This way I'm able to stay in the fight and burn people by constantly refreshing the duration of my passive. Also I'm able to go in more often in teamfights due to having plenty of survivability. Rushing a deadmen's second I found helps a lot with kiting and farming. As you can more easily access lanes and are able to stay in fights longer. Allowing you to get off more w's and q's to out tempo the enemy team.

Plus since the passive always burns for 5 percent max hp damage you won't easily fall off. By building around the passive burn I can leave fights to find better flanks and angles of attack to cut people off with her insane ms. Without sacrificing damage or liandry and prancing stacks. Also I believe Liandry actually extends the duration of her passive by a couple seconds. From what I can tell in practice tool, I also use a similar runeset as you. Though I run dark harvest more to deal some extra burst to targets due to not having too much ap.
1

averageJerky (1) | July 23, 2020 5:51pm
It all depends on how she feels. With the items i picked, I felt like everything synnergized with the runes to a T. If it does not prolong her damage increase (too much) like if there is still steady incline in her output numbers I don’t see a downside to rushing it. I’d have to see how it pans out in the mist of a true online game but it could be a GREAT alternative to innately tankier champions/team compositions!
2

TowerShieldDude | July 23, 2020 6:29pm
Honestly I'm just turned off with going her with High AP items. Due to her AP ratios being so low, with her best scaling ability being a close range attack. And with her sustain damage being in range of a lot of the point in click stuns in this game. Also kinda sad the W bop doesn't let you jump over walls or apply Sudden Impact for some reason :(
Load more comments (1 more replies) →
1

averageJerky (1) | July 23, 2020 6:46pm
I was talking to my friend and I believe she's either going to receive a buff or nothing will happen with her for a while. In the realm of recent champion releases I'd say she is the least "broken" that Riot has dropped in a while.

At the same time though I'm finding certain strange things with certain skills not procing certain runes, or hit-boxes feeling off. Only time will tell though
1

nTurbo (2) | July 23, 2020 2:44am
What are your thoughts on building tear on her to help with her mana issues along with fleet footwork with presence of mind for runes?
1

averageJerky (1) | July 23, 2020 5:53am
In my games that I played with her, I personally have* never felt like I needed the extra mana that a tear/item off of it would present me with. To go a little further with that statement, the only time I have even noticed she is a mana champ is during the early game (when you would not have access to a tear). However this is in the jungle. I have yet to explore her in a solo-lane setting and this might be the difference in our cases.

However, I am looking into a possible “on-hit” build and will get back to you with results regarding Fleet’s effectiveness!
1

nTurbo (2) | July 23, 2020 8:12pm
I didn't mean an on-hit build for using fleet, I meant just using it for the sustain in the jungle since with her passive ms she can get it back up easily and it helps her stay alive with ravenous hunter
1

MaximusPrime (2) | July 23, 2020 5:09am
Tear is really good on her since she's one of the fastest stackers of it in the game IMO. Check out bquipd's video on her! It's pretty informative and helpful.
1