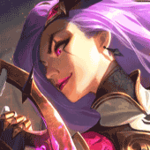 If you don't kill this champ before his first back you can forget ever killing him again in a 1v1. Pre first back you have the upperhand and pressure for sure so make use of that. You can just combo him and let him waste his W which makes him easly gankable and killable, also going ELECTROCUTE can make this lane way easier early stages. Use mostly E>W>Q vs vlad pre first back. If he has no pool look for all in trades again. FF the game if you didn't kill him before his first back and you can't pull off roams after that cuz he will 1v9 the game most of the times (pull off roams after first back and dont bother trading him anymore beacause of his sustain/dmg/tankiness in health :D). Having early MR is nice so u dont get os everytime u show your face :)

Go for trades the moment she Q's a minion or just go for Q poke. You can go for an all in as long as you're healthy enough to do so else she just Q-W ignite and you die. Be careful level 6 and onward, she has an advantage with R. Also make sure to not engage in a teamfight when you see that annie didnt use her stunned R yet because it can easly oneshot you + it cc's you which fks you hard. Mercs here is really good if you struggle a lot vs her because it removes her oneshot potential.

Really good with kata cuz of his CC engae and his ult which locksdown people.

Really good with kata cuz of his CC engae and his ult which locksdown people.

By Kova330
Early game
Against harder matchups where the enemy has the range or poke advantage, your goal is to survive the very early game and first few levels. Pick up as much farm as you can, but avoid losing a lot of HP in return. If you lose a lot of health early, you will not be able to go for an early all-in, but keep in mind that the only time you want to go for an all in is if u got Long Sword/ Doran's Blade/ Dark Seal ( Dark Seal for short trades). U can play the lane like this or u can go Doran's Shield and not trade at all although I would only suggest this in higher Elo's.

A way to play the laning phase as I mentioned before is either the safe route with Doran's Shield which I only suggest in higher Elo's OR the rest which is going for trades and play aggressive although its important to know that Katarina is in no way a strong laner so don't give up if u cant win laning phases, because over-time it will get way easier. So if u go for the aggressive route u will always want to start off by short trading, so for example: Q a minion > E to the Q dagger when it lands > W out or W and stay in the W to hit the dagger > E out. After u short traded u can look for an all in as long as u know where the enemy jungler is roughly. Remember that u need to be healthy before u decide to all in, dont ever all in if you're not healthy , because if u go for an all in u will probably also get minion aggrod. Reminder that Electrocute is way stronger for the short trades and Conqueror for the all in/skirmishes.

The early game depends heavily on the matchup and the enemy you’re playing against. It also depends on the Jungle matchup as the enemy Jungler likes to gank a Katarina. Check out the matchup section for tips and tricks to lane against the enemy Mid laner.

Mid game
As Katarina is a strong team fighting champion, you should be looking for team fights and trying to get kills. Whenever you’re split pushing or away from your team, look at what they’re doing and be prepared to follow and group with them if you’re sure you can win the fight. When roaming to help your team- be quick about it overwise the fight may be over before you get there and the enemy may win a 4v4 or 4v5.
Late game
Play around your cooldowns and active items like Zhonya's Hourglass if you purchased it as you’ll need it to survive team fights. As death timers are very long in the later parts of the game, it’s important that you do not get caught out or die as the enemy will be able to take objectives like the Baron, Elder Dragon or even your Nexus. 1 small mistake and your entire game is lost that's why its important to try to wait etc for your coldowns like Zhonya's Hourglass before deciding to take the fight (ping your team for it and tell them to wait).