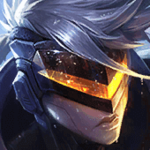 Cho'Gath's Q ability is a problem for Morde because usually Mordekaiser does not have the mobility to dodge them, which makes him tank tons of damage.

If you don't play right and safe, Illaoi is gonna beat your butt.

irelia is somewhat one of Mordekaiser's biggest counters, since she's mobile, high dmg, and can easily beat you early, mid, and late game.

If you avoid his passive then you should be fine

By foxthrone
How to play Mordekaiser
Mordekaiser is a good early champ and an amazing mid game champ. He can dominate through these periods, but come late game and he starts to lose his OPness, which is why it is recommendable that you try to end the game as soon as possible.

Early game is when you should try to farm, all the while trying to go for an opening at your enemy laner with your E. Keep a constant look for ganks, as pre-level 6 Mordekaiser is prone to be ganked since afterwards it's pretty much useless.

After you get to lvl 6, before using your R, make sure to consider all the other enemy team's positions, so that way you don't come out of Death's Realm and get ********ed by the jungler. Your R in teamfights is CRUCIAL as you can start with an immediate pick. In teamfights, aim to R squishy/high damage/support champions as they contribute quite a lot in teamfights. but in order to do this successfully, communicate when you'll R and when you'll get out so you don't just rush in by yourself and die.

Mordekaiser is a very good champ that can 1v9, however he loses his edge after a while. So if you're the match carry with a 10/0, be careful when you start approaching higher levels and stick with your team. Late game you must do your best to R and get a pick on the support. Don't engage by yourself late game even if you're the carry, it will usually not end good

Some simple Mordekaiser combos are

E - Q
simple
R-E-Q
same as the one before
Q flash
watch here to understand: https://www.youtube.com/watch?v=j5yWKZrXJvk