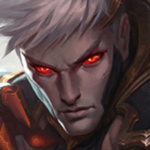 One of Mordekaiser's hard counters. Try your best to avoid his E harpoon poke and try to stay away from his flamethrower W. Use his overheat moments to E+Q+AA him to proc Phase Rush and your passive.

Another counter. Jax's mobility and high damage in the early game makes him a hellish laner. Avoid getting caught in his stun and avoid trying to poke him when he has it active. Try to land your Qs and don't pull him all that much.

Kayle post level 6 is an opressive laner against melee champion in the top lane. Try your best to abuse her pre-level 6. Hard pokes, all ins and zoning her out of farm are preferrable. While Mordekaiser does not have the strongest early game of the Top lane, he is still an opressive pick and you need to express that against Kayle.

A solid response to a Mordekaiser pick, whilst not that popular, Rengar's incredible burst damage and high mobility, not to mention hard CC and self peel makes him a strong pick against Mordekaiser. He is not an extreme threat, however, because of said burst. If he doesn't land all his skils and does not manage to insta-kill you, you can easily turn around on him with E+Q+AA+Passive(With Phase Rush) and deal a massive amount of damage.

This is mostly related to good Darius players, that will usually run Ghost + Flash. He can be quite opressive in the early game and will most likely try to engage you and trade with you at every possibility. Try to counter his E+W+AA+Q combo with your E+W+Q. When in this match up, I recommend starting with the shield (W) and playing it safe.

Despite many people saying otherwise, Singed is OP. A good SInged player will absolutely stomp you. His high mobility makes it nearly impossible for you to land your combo all of the times. You can still win this lane, but he is a force to be reckoned with in the right hands. Try your best to not let him farm and poke him.

Skill matchup. Aatrox's abilities are basically telegraphed, but so are yours. Whoever lands their combos more can usually win the lane, but Mordekaiser has a slight edge. Try to save your ult for when Aatrox ults, and steal his "upgraded" stats from his Darkin form.

A very oppressive laner but not that big of an issue to Mordekaiser. As a matter of fact, in many regions, Mordekaiser has been picked as a response to top Volibear. They will usually run Press the Attack with Sorcery or Determination. Try to avoid his W poke and try to not get caught in his stun. Poke him whenever he steps up to farm to prevent him to getting the 5-AA passive.

By bakk0n
BEGINNING
Hello! My name is b4kk0n and I'm a Brazillian League of Legends player and wanna-be content creator! This is my first ever guide on Mobafire and it is related to one of my favorite champions; Mordekaiser, the Iron Revenant. An oppressive laner and impressive 1v9 carry, Mordekaiser brings tankiness and strong AP damage to the team and offers a ton of utility, as well as a game-changing ultimate that can win fights or lose games.
PROS & CONS
PROS
+ Extremely strong poke
+ Nearly impossible to gank post level 6
+ Manaless
+ Good at all stages of the game, but can fall off a bit at the late game if the early game was extremely weak.

CONS
- Ult can be countered by a QSS.
- Immobile; no escape besides Flash.
- Lacks any hard CC.
- Often banned.

WHY PHASE RUSH?
WHY PHASE RUSH?
Phase Rush is an actual good rune on Mordekaiser. While many people might prefer the sustain that Conqueror brings to the table, having Sorcery as a primary rune can give you things like Nimbus Cloak and Transcendence and brings amazing sustain and cooldown reductions that are really good for Mordekaiser, who has considerable cooldowns to make up for the lack of Mana.

Not to mention, Mordekaiser can proc Phase Ruch quite easily. His basic combo, the pull with his E, followed by a Q and Auto-Attack procs both his passive and his rune. With Rylai, Liandry's and Hextech Protobelt, it gives Mordekaiser the mobility that he lacks and ables him to survive on lanes that would usually be oppressive against him, like Vayne. That, combo'd with the healing from Domination on the secondary runes, it gives Mordekaiser an amazing health sustain.
TIPS.
- Mordekaiser's E can cancel any channeling in the game, like Telepors or Shen's ultimate.

- Your Q's damage is increased if the enemy is alone.

- ALWAYS ult the biggest threat in the enemy team, even if you won't win the 1v1. It'll buy your team the time needed to clean the fight.

- Even in easy lanes, do not push the wave all the way to the enemy's tower before level 6. Mordekaiser is very vulnerable before level 6 to ganks by most junglers.