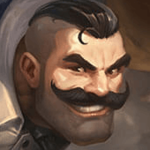 Ki11erCHAD | December 29, 2021 9:53pm
I actually tested this build vs 2 other builds, and can say that it has potential to be meta. The standard build and this one are almost identical to each other in terms of damage. Plus because of the omni vamp all of your abilities are capable of almost the same amount of healing. However the third build that i have( berserker grieves into prowler's claw, then blood thirster for sustain, collector for more leth and crit, and then lord dominik's for the same, then finally IE for more damage. This is [my] ultimate build for her, the problem with it is she is extremely squishy.) in terms of damage beats it out, but your goredrinker build is capable of doing more sustained damage because are not as squishy. So i conclude that this build is actually quite good, and could be a better choice for her than how everyone else is building her
Loading Comments...
Load More Comments