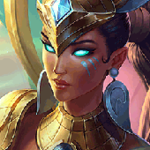 My summoner name is Ryxka. I have been playing league of legends for a long time and always played support the most. I was away from the game for some time because of RL but with all of that handled I am glad to be back ^^. This is my first guide on Mobafire however. I will be adding to it as I play Sona with the new Runes and as I learn to utilize the site. Thank you for taking the time to read my guide. If anyone has any suggestions or advice on using the site feel free to leave a comment or send a message ^^

This is my recent match history with Sona. Most of it is prior to the Preseason but I added so you can see how often I have played Sona coming into this season. Right now I play her in 55% of my games.

Summon Aery will give your early game poke to do slightly more damage and will also jump to your ADC to add a bonus shield when you heal.

The Ultimate Hat will give you a 15% total cooldown on your Ultimate by mid game. So you can lock down the enemy team more often and set them up to kill specific targets.

Absolute Focus gives you more ability power to poke down your lane early game and to assist your team with some extra damage in the later game.

Gathering Storm will ramp up your ability power over the course of the game. Building both your Aria of Perseverance and your Hymn of Valor. I take this rune when in solo que or if my team is building more toward the mid to late game. If my team is building toward an early game win I would consider taking Scorch instead.

Revitalize gives you bonus to all your shields and heals by 5% on all targets and 10% on targets below 40% health. It also adds to Summon Aery's shield and stacks with Ardent Censer and Redemption.

Conditioning I take as my final rune because it adds some resist 10 minutes in as the enemy ADC is starting to build some items. This helps to keep me competitive whether they are ahead or behind and keep going in for poke. It will also add to Zeke's Convergence and Locket of the Iron Solari later in the game.

Sorcerer's Shoes are good if you want to have a little extra damage on the tanky champions. If your team already has enough damage dealers then it is better to go with another option.

Ninja Tabi are the boots I use under most situations. They provide a little extra protection in lane and later in the game against the ADC or other AD users auto attacks. At ten minutes they also help get your bonus going from the Conditioning rune.

Mercury's Treads are the same as above except I would go with these if the enemy team has more AP damaging champions.

Boots of Mobility are good if you want to roam to different lanes in the early game or if you want more mobility in the later game for getting to objectives. They are also good if your team is pushing in different lanes and you want to get around to assist them. With Sona's Song of Celerity plus Frost Queen's Claim or Eye of the Watchers tribute procs you will be moving around the map quickly.

Frost Queen's Claim is a good choice for good poke and damage. The slow it provides on its active can also be a good engage or disengage utility. The biggest downfall to this item is that it has no warding. Personally I wish that Riot would move warding to the system they have on 4 already entirely and give every support item its own unique ability like on this item.

Eye of the Watchers is probably the best option to go with out of the two right now the way that wards work and depending on how your teams play style is.

Ardent Censer is always the second item I build on Sona and is really good as a support item on her. Not only does it passively increase her heal and shield but it also gives her and the ADC attack speed and bonus magic damage. It boosts her movement speed for engage and disengage and also gives cooldown reduction and mana regen.

Redemption is always my second purchase. This item finishes the percentage boosts to her heals and shields and adds an active to use for group healing. Redemption is also affected 3 times as much by heal and shield power amplifiers. So with the Revitalize rune, this item, and Ardent Censer combined (75% -90% bonus heal on active) it can really save a team fight that is going bad or provide the extra healing needed for an early objective. On top of that it gives more cooldown reduction, health regen, mana regen, and 200 health.

Zeke's Convergence is always my next buy. The cooldown on its effects matches closely with Sona's ultimate by the time of purchase and it provides armor, magic resist, mana, and cooldown reduction. The Unique Passive also adds a slow and boosts your allies damage. Giving them a burn whenever you use your ultimate near them.

Locket of the Iron Solari is a good last pick item if you need/want some extra defense in the late game and it also provides another active you can use to protect your team with a shield. The shield is also boosted by Revitalize rune and both the Ardent Censer and Redemption

Hextech GLP-800 is another good pick I have played with. It gives a good amount of ability power, health, and mana. The passive can be a nice way to gain mana and health back when being hit and using Sona's low cooldown abilities. The active also does a good amount of extra damage and slow that can be used to set your team up for a kill or add some extra damage in a team fight after your ultimate.

Support Sona - Dropping Beats On Your Enemies | Season 10
By SwelteringMuffin

「10.4」Carry with the Maven of the Strings
By KingNaki