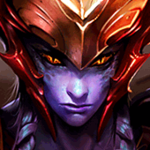 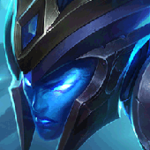 Shadowfall (1) | January 31, 2020 10:18pm
So what about Hail of Blades? I know conqueror is pretty OP right now specially since the rework that allows a lot of sustain on teamfights, but as a heavy early ganker (imo), I think hail of blades is better if you are planning to play for the early game and secure some kills. If you are also playing conqueror I miss the new witeness end as a mid item since it sinergizes well with conqueror plus the 5% movement speed that it always come in handy to a jungler. actually and since ZZ root doesn't exist anymore i'd suggest 2 options.

Option 1-> Following your guide i'd simply swap ZZ for Witeness End. You might lose some damage, but the Attack Speed, the sustain from passive and witeness, the magic armor and movement speed is simply too heavy for not taking it.

Option 2-> If you are going hail of blades for early ganks, maybe Malmoltrius would be a better option for the extra AD and 2nd shield (sterak beeing the first). I main jungler and my peak was high dia but I haven't tried Rek'sai too much since she simply suffers A LOT on birds , even if I rush the 12 early armor on runes, which is like wtf? So I am just trying to think about sinergies with your core build and asking you what do you think about them.

Also what's your opinion on rushing 12 early armor with the runes, then tabi and beeing that your only armor, then instead Deadman's plate, running a late Edge of the Night for having a 3rd shield (Sterak, Malmolstrius and Edge of the Night). Only in the hail of blades burst rek sai build. I mean, I think you have enough sustain with 3700 HP (1700 bonus with items), then with runes and tabi you get around 150 armor which is fair imo and with Malmoltrius you get around 105 Magic resistance. Since you are nearly 4K you should last for most burst mages and maybe only vulnerable to Cassiopea and a few more. Your full life and strong damage should give you the upper hand when chasing , kill and survive.

Talking about raw damage she gets 115 (Base Damage) + 258 a total of 363 damage, pretty fair for dealing a 800 (180+620) true damage bite with E and even a 1035 (400+635) plus missing health with your ultimate. I think it's significative her raw damage since I always thought of Rek'sai more of an initiator and squissy killer so the tf goes 4vs5 more than a bruiser with loads of sustain.

So what do you think about first the Witeness End add on your core build instead of ZZ, and how about the full damage/shields on the Raw Damage, hail of blades build? Could you try it out and give me your impressions about it? THanks!
1

Split King (7) | January 31, 2020 11:41pm
I have played a lot of Hail of Blades recently and it is 100% viable!. The 2 clips on this guide from season 10 so far are actually Hail of Blades games. Conqueror is still super viable as well so it is all about playstyle and preference.

As for doing Raptors you should not suffer at all. Just focus the small raptors first and its easy without losing too much health.

the 6 adaptive damage is objectively better than the 6 armor rune. You will clear faster AND healthier with the dmg one.

Steraks Gage and Malmortius are bad items together since their Lifeline passives doesn't stack fully.

Obviously Zz'roth is not an option anymore and it makes me sad. I HAVE played a FEW games with witness end, not just in season 10 but season 9 also. It only seems like a good choice against almost full ap teams. Rek'sai is simply too burst focused to make good use of the attack speed in teamfights.

Shadowfall (1) | February 1, 2020 10:20am
Tbh i found that if you start red and go Talisman instead of Machete you get INSANE sustain and life steal from raptors. I left at level using only a single potion since talisman is heavily triggered with rek'sai Q.

I've found somehow strong electrocute too because of the burst you can literaly delete a squissy in less than 1 second (jump from W, AA + Q) but I guess is only about matchups. I guess if there is a really squissy team you can try electrocute, if there is a normal team you can go Hail of Blades, and if they are tankier, maybe Conqueror is the right choice. I was thinking on this build on conqueror:

It's true you lose damage with your E+Ulti but if you are the only frontline of the team makes you a lot tankier and spirit visage boosts your Conqueror's passive. As a Rek'sai pro you are, is it worth dealing a bit less damage and have that much sustain in tf's? Or should I just stick to burst damage and get as much AD items I can?

I am with you that the core is ALWAYS Warriors+Boots+Hydra+Sterak's then in my opinion , if you wanna be tankier and run conqueror maybe Deadman's + Visage could be an option , if you are running Hail/Electrocute (most likely Hail) Maybe Guardian Angel+Edge of the Night should do since it's 100 more Ad , and some sustain with 40 armor, 325 Hp (I love Edge of the Night tbh), and both a Veil and a second wind with GA's passive.

I am just testing some things according to builds I succeeded with in higher elo than Plat, so what's your opinion on those 2 builds? Could you test'em and share your opinion? Thanks!
Loading Comments...
Load More Comments