PsiGuard (1495) | June 13, 2019 4:00pm
Personally I'd pick a champion you're actually likely to play. You'll get used to their base damage and basic attack animations. I'd also run the normal runes and starting items you'd use in game to keep things consistent.

If you want a challenge, probably pick a mage with low base AD like

Swain also work since they can't farm everything with spells until much later in the game.

If you'd rather focus on a top laner (other than Vlad/Swain), just play

Aatrox or whatever other top lane champions you're likely to play.

For ADC, I'd also pick a champion you're likely to play.

Draven have easy last-hitting, so if you want more of a challenge, probably go for someone like

AbaddonSoulchain (16) | June 14, 2019 5:15am
You're probably right, it's just that I'm aiming to practice without any help at all, which is why I'd like to avoid using runes or items, anything that can make last-hitting easier. My goal is to get adjusted to last-hitting with basic attacks so that I can build some sense that can be used for all champions. In that sense, maybe I'll pick a mage as you said to take advantage of their low AD.

The problem is that sometimes I feel like trying out a champion I haven't played in a long time and when this champion is a top laner, it can be difficult to just "pick up and play" since top lane seems to be a pretty grueling lane to play for someone with no experience.

I'll need to think about this a bit more but, even though you're right that I should use a build that I'm likely going to utilize in-game, I want to make this as hard as possible to build my sense around that.
1 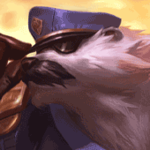 berronii (13) | June 17, 2019 9:28am
Start with Annie, practice with her Q. It's quite easy but do it. Aim having at least 100 cs at 10 minutes. Keep doing it until it happens in 100% of your attempts. Don't practice too hard, practice for an hour daily, it's enough as you can start over 6 times and that's completely enough. When you perfect it, start doing it with your main. Annie has prepared you and taught you the basics, use everything you've learned on your main - with the same daily routine. When you perfect it even with your main, your ready to play on Ranked and lose your nerves 'cuz of Teemo's Q which will make you miss 2 minions in each wave, or any other strong-poking champion. Cheers!
1

LuxIsMyCrush (13) | June 16, 2019 10:36am
probably you should learn last hitting with the champions you main, to learn they speed, damage and animations until it became intuitive when you can last hit, but many coachers uses Annie as example for training to farm and so on.
1

AbaddonSoulchain (16) | June 17, 2019 6:39am
Therein lies the problem, I don't have a main since I don't play lanes usually, except support and the odd ADC which I avoid usually because as a support main I get particularly irritated when my supports play passive and let the enemy bot harass me freely.

The reason I want to improve my last hitting is because whenever I play solo lanes I have a tendency to lose a lot of cs and fall behind steadily so my aim is to get better in the game in general. Maybe I'll use Annie as you said.
Loading Comments...
Load More Comments