Views: 3631 Got a Penta-Kill as ADC Thresh, thought it was pretty funny.

+Rep | Report
get rekt m8, lel, penta, thresh
I had a pretty funny game today. It started off by me queing up with 4 of my friends and we wanted to do something trolly in normals. The

Rumble on my team called top but my other friend, the

Rammus, insta-locked and called top. I already locked in

Thresh so I decided to go ADC. I forgot to swap out my masteries, so I had AD runes and support masteries. The

Rammus and I decided to bot against a

Ashe and we pretty much dominated them all game.

We then decided to go mid just to **** around and kill people, but what happened next was pretty hilarious. The... Read More
2 comments

Views: 924 One in a million? Me and Draven had the same exact damage. 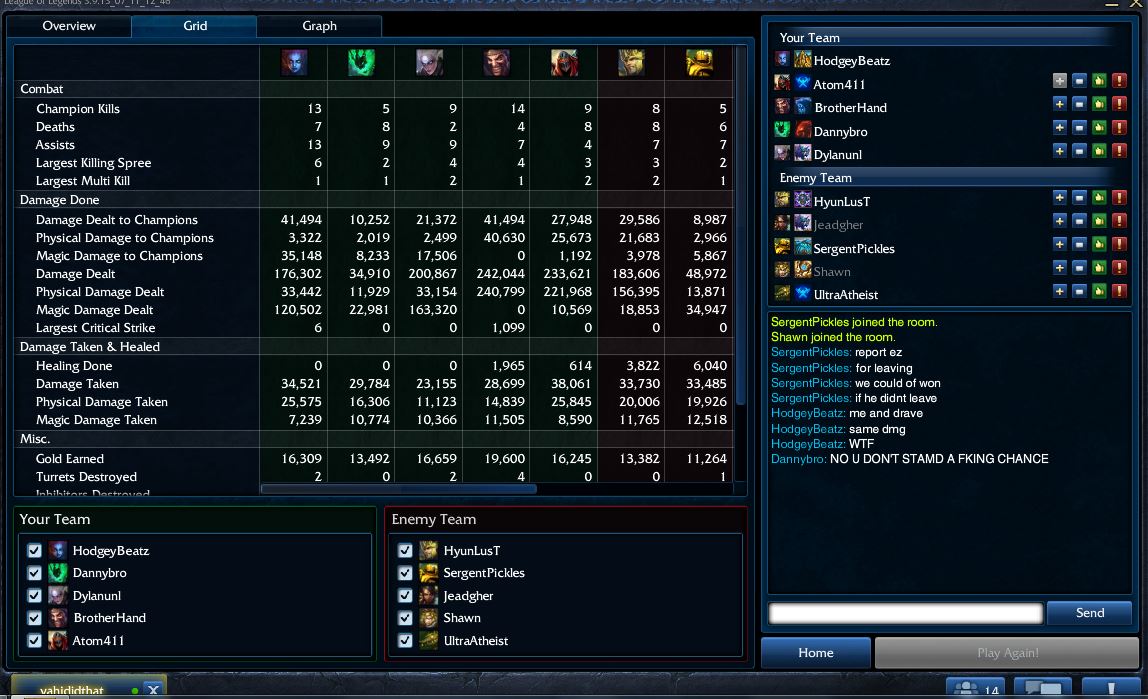 As you can see by the photo, me and

Draven has the same exact damage at 41,494; which I think is pretty crazy. I don't know what prompted me to upload this, but I thought it was pretty intresting lol. Read More
0 comments

Views: 637 What is up with all the trolls and afk's recently?

+Rep | Report
afk, me sad, riot pls, toxic, trolls, unskilled
As the title states, what the hell is up with all these trolls lately? I don't understand. I have had 4 afk's (which were mostly rage quits) out of 6 games, which were all losses. I have also been getting tons of toxic players. Last game our

Swain was mad that I accidentally took his blue buff due to the red buff DoT. I apologized to him but then he decided to troll. He never helped us and proclaimed, "have fun 4v5 noobs". He didn't actually afk, but farmed top all game and harassed us. Another game our top

Trundle got wrecked by this

Kennen which is understandable due... Read More
3 comments

Views: 483 Done with school, time to revamp my Singed guide.

Singed guide a **** ton. New build, new match-ups, and maybe new coding depending on how lazy I am. Read More
2 comments
1 2 3 »
Help Support Our Growing Community