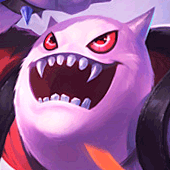 By RamenShamen
Laning
Lillia plays as a skirmisher in lane. Short trades are the name of the game. Go in, hit your Q, run out. You can Q your opponent from really creative angles and can easily zone your opponent from the wave if you get an advantage. You shouldn't ever fully commit unless you're certain you can secure a kill. Try to push the wave and roam with your passive speed. Try to hit Q on the the opponent and the minion wave by positioning either above below or inside the wave.
Roaming- Notes for Mid
Try to push and roam. Throw an E down the opposite river you're roaming towards. Unless the enemy team is communicating, it'll throw the side lanes off. Try to hit your passive on jungle camps or crab to arrive quicker than bot or top expects you too.
Mid Game
Play for picks. Use your Ultimate to get picks. It does a surprising amount of damage. Play for small skirmishes like 2v2 or 3v3. Lillia also offers decent zoning so try to zone for fights around objectives. Lillia's split pushing isn't great but it's not the worst either due to her good wave clear once she gets some items. I would recommend grouping with a teammate or two and playing around baiting and getting picks and transitioning that to objectives and trying to snowball the game that way.
End Game
You aren't too useful late game. Lillia's range is short compared to a traditional mid lane mage and doesn't offer a solid front line like a traditional toplane tank. A 6 item Lillia can't out tank a 6 item Darius and can't deal as much damage as a 6 item Syndra. That being said, she excels if slow fights. If you're team can constantly peel back in team fights, Lillia excels. With the slow from Rylai and passive damage from Liandry's and Dream Dust, the enemy can't chase for long. In short, try to take fights slow, Lillia's burst damage is terrible but sustained damage is excellent.
Notes on Teamfights
Try to duck in and out of danger during fights. Land a Q run out. Go back in with a W and a Q then run out. Land a E on the backline. Generally you play as a distraction. If the enemy team engages on you, you're team should be able to engage on the enemy backline and win the fight that way. If they ignore you, you'll eventually wither them down to a point where they can't fight. Lillia just can't get CC locked otherwise you'll get bursted and you'll provide no value. Use you're movement speed bonus well and don't get caught and you'll be just fine.
More Notes on Items/Runes
Glacial Augment: This is a decent rune on Lillia. You don't really value the slow as much because you don't have any skill shot based hard CC.

Luden's Echo: In basically every scenario for Lillia, GLP is better. You don't need the extra waveclear from the Echo passive. The burst from GLP is actually higher than Luden's, you also value the slow from GLP more.