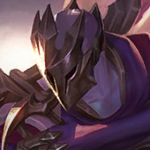 Champions with dashes and stuns are a big threat for Jhin, since he doesn´t have any escape tools. After getting hit by her you won´t be able to get away in time without using flash. When in her ult you won´t be able to kite her effectively, therefore you should only trade with her when her E and Ult are on cooldown.

You´ll have a hard time when facing Renekton, since he can dash to you, stun you and get away again, without you being able to do much demage to him. Only trade with him when you know he doesn´t have have his E up.

The same thing goes for pantheon. Only trade when you know he doesn´t have W. Also don´t take the tower protecting you for granted, since Jhin is really squishy and pantheon has a way to protect himself from towershots while doing demage to you. Jhin lacking any kind of dash, you won´t be able to get behind him in that situation either.

While Volibear also has a stun that is hard to miss, you can avoid getting his bit it by baiting him to walk through a trap and then root him and run away with the movement speed boost. Try not to waste you W, since without it, you won´t have a chance of escaping Volibear without using flash.

Akali can cover a lot of distance in a short time and slow you, which will make is rather hard to kite her. When going against assasins you can take Exhaust, but you shouldn´t completely rely on that.

Jax, too, leaps on to you and stuns you. On top of that, you won´t do demage to him while he is using his E (so don´t accidentally waste 4th shot on that). Overall try to avoid Jax.

By Plasticpear
With the new Items being released, there are new ways to build every champion, including Jhin. While he can make use of Galeforce, Kraken slayer isn´t exactly the best choice for Jhin, because of his lack of attack speed. This would be partly true for Immortal Shieldbow, since the shield it gives is really good, however, he won´t be able to make use of the lifesteal as well as other Adcs. Eclipse, however, synergizes really well with Jhin`s kit. The item will be even more effective in the top lane, because you´ll be able to poke your enemy more easily there.