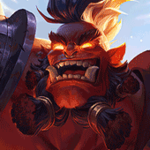 rooSuicidalPanda | June 17, 2019 8:19am
due to changes in how Infinity Edge works, a lot of builds on here are getting outdated if they are not consistently updated. I will try to explain it the best of my knowledge.

nowadays Infinity Edge works like this: you gain +25% extra CSC (Critical Strike Chance).
it also increases your CSD (Critical Strike Damage) by +25%. this will mean that if you now instead of dealing 200% of your total physical damage on CS you now do 225%.

your CSD will automatically scale with your total physical damage.
an extra nice bonus about IE is that you gain 80 attacks damage on top of the CSC and the CSD
2

Hunter Drake (1) | November 9, 2012 1:05am
Specolar wrote:
I know this item is pretty good for an AD carry. But heck all I ever see is the same damn build on everyone

Berserker's Greaves, and then some survivability item. Why is everyone so afraid of mixing it up and having fun?

I tried building this once on

Vayne (only played like 3 games with her). It wasn't that great, it was like boom, enemy champion died, *yawn* too easy barely even used my abilities. It made the game to easy for me, meanwhile when I tried my full AS/AD little crit (only crit came from

Infinity Edge) build. I had way more fun watching all the stacks of

Silver Bolts get applied, maxed, then applied so fast I managed to get it off twice in 3 seconds. Also watching a melee champ with no gap closer (

Tumble run away a bit and start attacking him again is hilarious.

Another champion I'm glad I never tried it on is

Fiora it's fun going full AS/AD on her too. It's fun watching a minion wave disappear in less then 2 seconds from a full AS/AD build with maxed

Burst of Speed. Also watching the enemy's health go down a medium amount constantly is more fun then just that big chunk when you happened to get a crit. If I wanted that I would play a mage not

I'm not saying this item is bad it's just way too common for me. Come on people mix it up, have fun, and stop caring for just the win or the boring kill streaks.

Infinity Edge should always be bought first than

False. Infinity Edge is a core on AD and should be bought early but if you are playing anything else Top/ Jungle you should get BT first. Also even on AD carry, sometimes you will need the sustain earlier on then the crit if you have a nonsustain support.
1

Infinity Edge should always be bought first than