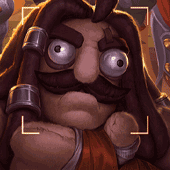 If You Suck Less

Fk this champion. You're gonna get fked out of lane and unless you got Flash, you won't be able to engage her.

Also fk this champion. He can't throw you back to the 80's like Vayne can but his blind is a fking bitch and you can't proc your Q to stun.

By now you see the issue here. Fk ranged champions in top lane.

She ults, you ult on top of the entire enemy team. EZ.

She dashes in and ults, you ult on top of the enemy team. EZ.

He's just broken rn. If he ganks top, you best believe that the other laner is dead.

She ults, you ult on top of the entire enemy team. EZ.

She dashes in and ults, you ult on top of the enemy team. EZ.

He's just broken rn. If he ganks top, you best believe that the other laner is dead.

By Low Elo Cheeser
Laning
Okay, so in laning, you have the prio almost always. Not many champions can match your damage when you land your E on top of them and you. It's almost unfair for them since you get a shield, they take big damage, and by the time they get through your shield, your PTA is already slapping them. Most match ups, you will win. But don't just all in them level 1 like a degen. Champions like Darius can fk you up with his bleed passive so choose your fights by knowing what the enemy can do. Anyways, in laning phase you should have the prio from your duels and your wave clear. Your passive shoots lightning out of Voli's hands (Paws?) after 5 damaging attacks and abilities. The lightning hits 4 nearest enemies (Including champions), which means you got a massive wave clear and the enemy can't farm without taking damage.

So in theory, you take E level 1. If the enemy engages, you throw your E down on top of you and the enemy. Slap the **** out of them until they either die or flash out. Congratulation, you just won the trade. Now the enemy needs to play like a ***** unless they want to give you first blood. When you hit level 2, you got a couple of ways to fight. If the enemy engages the fight, throw the E down then Q them to stun. They can't escape from the E and you get to proc your PTA for free. But if you want to initiate the fight, Press Q and stun them (Q also gives to movement speed boost) then throw the E down BEHIND them. They will try to run after the stun is over and get hit by the E on the way. When you hit level 3, just weave in W since it gives you some damage and healing while it resets your auto attacks (It allows you to auto attack instantly after hitting W).

When you do push the wave in, please, for the love of god, ward the long brush in the river.

Early Mid Game
Okay unless you fked up laning phase, you should be able to make your opponent run in fear when you get close to them. Assuming you didn't get camped by the enemy jungler, you should have a relatively easy early mid game. If the enemy laner wants to run it down, keep killing them. If they are playing like a ***** under tower, always look at the river to either help out team fights in river or take scuttle when it spawns. Now after pushing in the wave top, if you and your jungler are present, sneak a Rift Herald in. Spam ping the Rift Herald until someone with a brain comes and help you. And take that ****. Don't give it to nobody. That's yours. With that, bust the top turret. Congratulations, now you are filthy rich.
Late Mid Game
Now, you should be a menace on the map. Go move down to mid or Teleport bot and just annoy other lanes. Once in a while, you'll see a little blip on the map, showing the other top laner sheepishly farming on their side of the top lane. Ignore them. Keep helping your team out with dragons and ganks. You also take towers very fast with Demolish and Nashor's, so have at it. You also provide great tower diving for the team so test your limit if you feel like. Always take jungle farm if you can. I usually won't touch the buffs (Red and Blue) since the junglers can get mad at you, so take wolves, krugs (The rock things), and gromps (The frog things).
Late Game
By now you should have taken multiple towers and wreaked havoc on the map; it's time to end the game. Always prioritize objectives with your team, build Blade of the Ruined King for spicy percentage damage. Use your ultimate to assist your team with diving and taking turrets.
Team Fights
When you team fight, you do NOT want to be popped before dealing damage. So if you are going in, make sure to throw the E down and step in it to extend the fight with shield. if done right, some of the enemy should be almost dead while you sit on 80-90% health. Your teammates benefits from this since they are almost forgotten by the enemy team with you in the middle of the chaos. I've seen too many times the fight ends quickly because Voli gets CC chained so he can't do anything but get deleted off the map even before he can cast any other ability.
Pick
During mid game, try to pick off squishy champions. Surprise them with a Q stun and have at it. But know when to pull out since the enemy team is converging on you if you do not finish the fight quickly.
Itemization
Rush Riftmaker. Then depending on the match up, build Glacial Buckler (Half of the Frozen Heart, good against AD) or Spectre's Cowl (Half of Spirit Visage, good against AP). After building one of those 2, build Nashor's Tooth. Remember, don't finish the Frozen Heart or Spirit Visage before getting Nashor's Tooth. After that, finish the item that you were building (FH or SV) and move onto the other tank item. Grab swifties whenever you can. Finish out the build with Blade of the Ruined King.