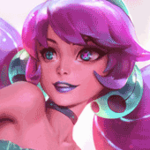 This is a bit of an off meta pickup, but Kindred Top is an absolute CHAD early game. She can and will bulldoze anyone in the top lane that doesn't have the mobility to stick to her constantly. She's only a 4 though because of how little it's picked at the moment.

He's not very tanky so you can poke him down early, but once he hits 6 and gets mythic his fear becomes a major problem. His fear range is hard to escape from even with Lillia if you don't have stacks beforehand. You can kite him while hes chasing you to weaken him a bit, but you may need to play safer than youd like against him.

Camille is hard to beat because she's one of only a handful of champions that can keep up with your mobility and her AP shield makes it hard to win early trades. If you can avoid her E you can kite her to death or win trades, but if you let her get close it's going to be a dirty fight. With the camille nerf in 11.18 I'll be sure to pay attention to how it affects her early game and come back to this mobafire to adjust the rating if needed.

he can be dodged around a good amount early , but if he manages to hit 1 Q there's a good chance he'll be able to combo the others together. You can usually walk out of W but his R gives him enough MS to run you down unless you're at full stacks.

she has Q spam and can use her mobility to dodge your poke. She's not a massive threat as she's weaker early and her shroud doesn't give a ton of protection from Q, but she's still an even matchup.

having her healing and move speed gain along with yours makes for a mega fast force of mother nature that cannot be killed.

having her healing and move speed gain along with yours makes for a mega fast force of mother nature that cannot be killed.

By King Turtle
Build Introduction
This build was an idea I had after the Lillia changes. At first I tried Lillia in top with just a normal ap build but felt that I was too squishy to be consistently strong in lane. Then I began running more bruiser and tank items and felt a lot better about my lane phase. This build is a great alternative to normal Lillia if you feel you need a tankier champ in your comp or you think you can run around people without being blown up. First we'll go over the pros and cons of this build then we'll check out the rest.
Pros
-Tons Of Healing: With this build you get TONS of healing from her base kit, spirit visage and her late game tankiness letting her be in fights longer. You can still blow people up while being tanky and getting similar if not more healing than standard Lillia.

-Good Lane Presence: After the mini rework Lillia top became a playable position. In top there are plenty of melee matchups that you can kite to death with abilities including some of the most popular champs like Sett for example. You're hard to beat against most matchups and if you decide to roam you're still Lillia so you can make an impact.

-Good Teamfighting: The issue with normal Lillia is that shes too squishy to stay in a fight consistently as her kits is based around her being hit and run, but with this build you can still be hit and run if you need to while having the capability to dive into a teamfight and wreck **** without inting.

Cons
-Less Roam Potential: due to the way top river is positioned throwing Es down from top lane to mid or bot is difficult and most of the time will just hit a wall before it reaches mid. You also don't have the base speed to roam over unless you're absolutely ahead or have nothing to do.