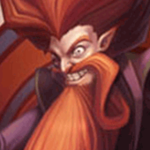 If you dont want cc

Ionian Boots of Lucidity
The two most important items

Control Ward
Other Items for you

Time in a Bottle (PASSIVE)

Just ban Pyke. His mobility, stealth, and hook all hard counter your safe laning style, and you can't run away from him in lane or in the river. For example, you can get away from a Blitzcrank after being hooked because you are really fast with your e. But when a Pyke dashes on you, you waste your e, then you get hooked and it's game over, Pyke can do this anywhere, and if you are caught out mid roam, you aren't helping the team.

Instead of going through each champion and telling you who to be scared of, I want to give you a general idea of what forms of tough matchups look like. Fortunately, the skill of your ADC can make most of the matchups ALOT easier, or harder. Lux and others like her is pretty tough because she has a large amount of poke and cc, and in tandem with her ADC it can be really scary for a teammate to 1v2 while you are off roaming. I'd suggest staying in lane more often in order to give peel to your ADC.

Hook champs are also pretty tough because landing a hook is basically insta kill for them, meaning there is not a lot you can do against a good Thresh or Blitz without getting yourself killed in the process. I would take the opposite approach that I would for Lux and roam more often so that you can get advantages elsewhere. Having a independant ADC in these matchups is super good like with most roaming supports.

These champs like Leona, Alistar and Malphite are dependant on your ADC, they have engage, but not like a hook, a good ADC normally isn't as scared by this when they are playing safe.

Enchanter supports normally have good poke, but not enough to kill an ADC, as long as your ADC isn't playing aggressive when they are low, it is a pretty safe matchup.

These champs are also dependant on their own ADC's to do well (So they are just absorbing extra exp away from their ADC). Pretty self explanatory.

Then there is Yummi, which I don't really know how to place.

By Midas_Wail
Why is this here?
Alright, you have made it this far to hear out my full idea. Thanks. Just before I rant about this, I AM NOT A GOOD PLAYER. There are people are out here giving significantly better guides than I am, and they also have a lot more experience and skill than I do. This whole thing came to be cause I like messing around with random ideas and stuff, this whole this is more of a question to the community to see if this whole thing is reasonable rather than claiming this as the new meta. If you want actual guide for how to play Zilean correctly I recommend Biotics build, because he has undoubtedly the most experience and his build is fantastic (This is the link to his build). I also recommend Zileni's guide for his large amount of insight he gives on matchups, pros and cons, abilities and so much more (Click here for that). Now that we have that out of the way, I ask this question: can a roaming Zilean build work?
My thought process.
Ok, so first of all, I think a roaming Zilean could work for a few reasons. He has his E, which has so much utility, you could go full speed down the river for a fast gank, or it is basically a point and click stun for when you need to catch the enemy. Then his bombs, ADC's don't like bombs becasue they can steal cs from the lane, but they are really powerful early game, and can force the enemy bot lane to back within the first few levels, giving more reason to roam. I also think building Shurelya's Battlesong would advocate working with the jungler for ganking, giving you both a speed boost (who would deny a speed boost). Well, if I'm wrong let me know, and if I'm right let me know. If you want a easy way to talk to me, you can email me at jack@wideeyed.co, but I can't guarantee I'll respond.

Midas_Wail Zilean Guide
Vote Vote
Roaming Zilean (Just an idea by a Zilean enjoyer, give feedb
Why is this here?
My thought process.