Ryze - Protector of the Scroll

ItsASledgehammer | July 3, 2016 3:35am
I know he's been busy, but he's updated his other guides, and it's been a year...not trying to be a jerk, but them's the facts. I really enjoy the guide, so it's deprssing to see it just rot away in archives for so long
Load more comments (1 more replies) →
1
[-]

On a more serious note I assume he just doesn't want to update it. This is for pre-rework

Ryze, right? I never saw Foxy as much of a

Ryze player, and after the rework updating the guide would almost be like writing a new guide. He wasn't the person who wrote the guide in the first place, so I think he's just not interested in updating it. He vowed to keep Hawkken's

Ryze guide updated, but the moment he updates it for the rework it stops being Hawkken's

Ryze guide since so much has to change. 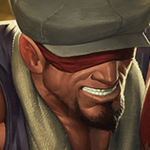 Foxy Riven (129) | March 28, 2015 3:42am
^ Needs an update indeed, was waiting for his rework, but it looks like they're stalling it, so I'll update it soon enough. Will re-check the runes and masteries as well. He does struggle quite hard against the more mobile champions. And when

Darius flash - apprehends, you're dead. As I'm quite busy I'll have to look into tis next weekend.

CallMeSmigl | March 26, 2015 5:02am
First of all: great guide! You put a lot of effort in it and I appreciate your thoughts about the Protector of the Scroll :D
Maybe a little Update would be nice (f.ex. Elixirs) and maybe also a section about the matchups would help out.
My question concerns the Masteries. Playing Ryze almost only Top (I honestly never see him mid), wouldn't there be some more sense in focusing on the Defense tree a little more. Especially when facing an AA heavy opponent like Riven/Irelia/Trynd (....)? IMO Ryze ain't a bad pickup against them, since he can punish them really hard for going in. I struggle to put 21 Points in Utility, when I lose so many Defenses, that exaggerate my duelling power and TP ganking pressure. Anyway: really good guide. Thanks mate (+1)
1
[-]

Foxy Riven (129) | March 23, 2015 7:46am
It seems like he'll have an easier time harassing the opponent now. But we still have to consider his major weak spots in the current meta:

With the tanky CC monsters in the jungle (and top) now I don't think we'll be seeing him much. I'm still waiting for his rework.
1
[-]

I just want to know what you think about this patch and ryze.

The reasoning behind IBG + muramana was: Kiting an AD champion and dishing out tons of damage. So I suggest going that route against AD champions who lack gapclosers.
Also, the active of

Hoppiedays | March 8, 2015 6:29pm
Hey man I just wanted to say that this build is great and i am loving ryze more and more, but whenever i build Manamune my friends always make fun of me and I don't know why I do build that? I like the Muramana+ICG combo but what is a good reason to get manamune? I can't find one so please help. Thanks!
Loading Comments...
Load More Comments

Ryze To The Occasion! - RYZE MID GUIDE!
By snukumz