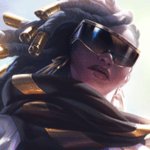 Curse of the Black Mist (E)

By sp00kz
The senna mentality
So, this guide isn't meant as a full guide on itemization and runes etc. This guide's purpose is to give you the proper mindset when playing Senna. A little about me: I've been playing since season 1, and early into season 10 I picked Senna up. Up until this point I had never even come close to reaching dia, having been stuck plat and gold for the past 4 seasons.

After picking senna up, I struggled a bit, but after 30 games or so of losses, the lp started coming in, and at the end of the season I reached diamond, with a 63% winrate over 150 games on Senna, and not that it matters since the metrics are quite weird, i achieved top 0.3% Senna in the world according to leagueofgraphs. While this doesn't seem like much, this also includes the games where I learned how to play her.

QUICK NOTICE: This guide is not for everyone. What I will talk about mainly applies to elo's below mid dia, as this "mindset" is easier to implement in the ranks where players have yet to perfect positioning and trading in lane. You can of course apply this if you're a higher elo player picking up Senna, but I would assume that if you are an experienced high-elo Senna player, you already do this on autopilot.

So, now that I've told you my story, we are ready to talk mindset. In short, the most important part of the game when playing Senna is collecting souls. You always need to focus on grabbing souls. Perfect your positioning and movement so that you get souls that otherwise would be lost because you weren't in the position to get it. The enemy adc wants to farm, and the enemy support wants to protect the adc/harass you. When you fully understand this, you start seeing a pattern to when you can trade. You may have less hp after the trade, but you gained 1-2 souls for it. This means that while taking "bad" trades on any other champ is considered bad, for Senna it's good. It is somewhat the same as when playing or playing with a Yuumi in the botlane. A bad trade is a good trade, because you can heal up, while the enemy cannot(unless of course they also have healing). I know it will seem like I'm repeating the same thing over and over again, but playing Senna is really only about collecting souls, and be extremely aggressive to get them. When you fully learn how to spot "free" souls, you will feel like laning phase is a breeze(while below dia of course).

Basically, a Senna player is only as good as his/her/their ability to collect souls.
A little about the basics. Souls can be collected by minions/monsters/epic-monsters dropping souls, or by attacking an enemy champion twice(cooldown on champ after the soul is collected). Senna's q and W lets her do this quite easy, as it counts as one of the hits.

Glacial Augment with Approach Velocity complements the soul collecting nicely, as when you Q or AA, you slow the enemy, and speed up when moving towards them, making it easier to do short trades without even getting hit. I tend to never play Grasp unless i blind Senna into an unplayable comp where every champion on the enemy team can oneshot me. Grasp is decent, but for the aggressive soulcollecting playstyle that i advocate for, i think you lose out too much by not having the slow and Approach Velocity(There is a reason the usual grasp builds used to buy slowing items).

Now, when playing senna you need to play aggressive in during laning phase. This means Q-AA, W-AA, W-Q or AA-AA on the enemy botlaners to collect the soul. Keep in mind that there is a cooldown per champ on souls, so try to trade when it's back up again. You also are very happy with taking bad trades. The reason being that sure, you have less hp than the enemy, but you got a soul or two, and your Q heals you as well.

This will set you up nicely in lane, as for every 20 soul, Senna gets increased range and crit chance, making the trades easier and stronger(Remember than every soul gives you 0.75 attack damage). Senna does not get AD per level, so this makes the soul mechanic even more important. So, during laning phase, constantly look for enemies that walk too close. Senna starts the game with 600 range, meaning that you have 50+ range on most adc champions(Excluding Aphelios with Calibrum, Ashe and Caitlyn, as well as Tristana after level 11, but hopefully you've stacked enough to still outrange her).

Having a ton of souls makes life as Senna a lot easier. You can harass immobile champions with ease, and it also makes collecting souls from poke easier as well. Having the aggressive mentality of always taking trades and collecting souls will make you really oppressive later on in the game. I tend to not really focus on kills, but taking trades that gives me souls. This often leads to kills, but the most important part are the souls(Sort of like Nasus Q stacks, but on steroids).

So, to summarize. When playing Senna, your main objective is collecting souls. Put your full focus into punishing enemies that walk into your "soul collecting range", and proc it whenever it's up if you can do so without dying. Taking bad trades are fine, as HP is less important than souls. Hopefully by the mid-game you have enough souls to stay out of danger, and if you get jumped by an assassin(not a turbofed one of course), exhaust and Divine Sunderer will bail you out.

Another good tip is to keep an eye out for potential souls that can be collected around you. If the krugs or raptors are up, and you have someone to help you, let them kill the monsters so you can collect the souls.


PS: I will update this guide to be more detailed, but I just wanted to get the point across that if you play Senna, souls are your main objective. The collecting of souls gets harder the higher elo you get, but usually below D3, the positioning of players are still "bad" enough that you can get free stacks!