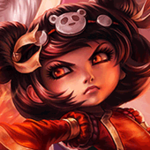 Aspect Of The Cougar (R)

Nidalee wins this matchup early game as long as you don't die to ganks. Bully Akali before she gets to level 6 and gets items, you should win. Auto attack her as much as possible and buy pinks so you can kill her if she messes up.

Nidalee wins pre 6 as long as you make sure to harass her every time she tries to cs and you try to zone her as much as possible. Just be careful if she tries to all in you at level 4 or 5 by using Q on a creep and stunning you before using her W.

Full AD Nidalee always outtrades Vladimir. If you land a spear on him or he steps on a trap, you should be able to kill him.

Gragas is a lot weaker since patch 4.13, bully him with auto attacks (just like in other matchups) and make sure you aren't taking too much damage from creeps. The only way you can lose is if you auto him with a lot of creeps near and he body slams towards you and tries to kill you using the added creep damage.

You will outsustain Lulu, just focus on dodging her Qs and make sure to punish her for it whenever she misses you. Always be auto attacking for the sustain too.

Again, you win this matchup in the early game with your auto attack harass. The only thing you have to watch out for is geting ganked or harrassing him while he has a lot creeps near. Make sure to zone him as much as possible so that he doesn't get to the point where he has a RoA (relatively) early because then he'll be able to outtrade you.

Nidalee is a champion that can be picked into anything in Solo Queue. In a competitive 5 vs 5 environment, however, you want to make sure that your team can 4 vs 4 really well while Nidalee pressures side lanes and forces the other team to send more than one player to her lane to stop her. The reason why you can still pick Nidalee into anything in Solo Queue is because she's able to do well in any matchup if you play her correctly. She has an escape to avoid ganks and she deals mixed damage, making her hard to itemise against. All in all, she's a perfect champ to play in this meta right now if you want to win games!
Runes

As Nidalee, you want to take advantage of the brushes during the early game to increase your movement speed with

Prowl, allowing you to get in range to auto attack your opponent before running back into the brush to lose (potential) creep aggro.

Primal Surge / Swipe on Nidalee and use that to heal the damage I take from trades and to attack faster. I grab

Javelin Toss / Takedown at level 3 to increase my kill potential.

If you're against a melee champion in top lane, you can also choose to take a point in

Javelin Toss / Takedown at level 1. If you're using

Ignite and you manage to harass your opponent down quite a bit, this start could allow you to kill him if you hit level 2 first, level up

Bushwhack / Pounce, and then combo your enemy with

Pounce and execute with

Ignite. It's cheesy, but some people still don't expect this damage from Nidalee.

In any case, you want to look for opportunities to hit a

Javelin Toss after level 3 and see if the enemy is low enough for you to kill him. Other than that, during levels 1-6, just farm and harass your opponent slowly until you can kill them in lane.
Mid Game

This is the part where you want to split push, preferably on the side that doesn't have objectives. For example, if dragon is up, you should be pushing top alone. If dragon isn't up, you should push bottom and tell your team to group around mid/baron.

In solo queue, you just stay in top lane and apply pressure while placing wards to protect yourself. You should also try to look for

Teleport plays on the other side of the map.
Late Game

As far as applying pressure goes, the late game will be very similar to the mid game. However, you will generally start moving deeper into enemy territory and your team will be either pushing the other side of the map or trying to take control over baron.

Your job is to make the enemy team send more than one person to your lane, allowing your team to take objectives while your enemies try to hold you down.
Teamfights

Teamfights as Nidalee are kind of weird, though luckily her strong laning phase generally grants her enough of a lead to be relevant in them.

If you jump in too early as Nidalee, you'll just get CC'd and will probably end up dead. Instead, you want to look for targets with low HP, aim at them with your spear and then execute them quickly once you get the chance. If there is no low HP target, you are probably better off just playing the fight as if you are an ADC, auto attacking the enemy front line while kiting back or just peeling for your team.

Once you get some tanky items (after

Trinity Force), Nidalee is almost like a bruiser in teamfights, too, so it is also a possibility to jump in in Cougar Form and just sit there attacking like a

Thanks for reading my guide!