KajiKumihoAkukei (140) | June 4, 2018 2:01am
First of all: there's no bad team players! :) If you go in your games calling your team bad you are going to get a lot of tilt- and int'ers.
Everyone can have a bad game and I am sure you also have a bad game sometimes, just wanted to get that out of the way first.
The best way to win games with your team behind is by staying positive and keeping you cool (which can be very hard sometimes, I've been there to).

Now to answer your question: If you want to climb in low to mid elo I suggest you pick 2 roles to focus on, 1 as your main role and 1 that you also can play in case you don't get your preferred role. So in your case I would say main ad carry and mid as your 2nd role.

For ad carries:
For midlaners it would be useful to know which ones you like playing right now. Because there are different style of midlaners, so I'd like to know your playstyle! :)
1

FupiDupi (7) | June 5, 2018 9:15am
The first step is admitting you are trash at the game because you aren't good enough to carry your team. If you don't deserve to be in your elo then you WILL climb. After realising it's you who needs to improve, then you can become better as a player and learn how to set your team up for the win.

In my opinion, it is much easier to climb in low elo if you don't play botlane. Having to rely on another person can make the lane really hard whereas if you are jungle for example, you alone can impact every lane. If you are solo you know it's your fault you lost lane and so it's easier to fix your mistakes. But if you really like botlane it is still possible to climb - it's just harder I think.

Evelynn in jungle and if i get fed i can singelhandedly carry games because of the potential to delete their ADC and mid from the game. I started out playing random jungle champs like

Zac and others who i wasn't best on. Once I started maining

Evelynn i focused on my role rather than the champions and after focusing on what I was doing wrong I got a lot better at it.
2

BitBot (2) | June 5, 2018 10:42am
I honestly think the main cause of losses in low elo is bot laners. The best way to counter this is by playing support or ADC yourself and NOT being trash. Don't blame your teammates if you lose bot lane (unless you're

Thresh) if you lost it is your fault. Solo-carrying as a bot laner is very easy if you are skilled enough. Just remember to be nice to your ADC/support.
1 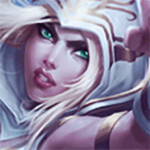 Dysokiaphyx | June 6, 2018 8:02am
I personally play ADC, in low elo. I'm silver 5 and can't seem to climb. I can play Support well because I really enjoy it. I end up playing both ADC and Support most game. However I don't win. About 70% of the time I win lane. Not always because of me, it's a twin effort. However the 30% that I lose lane it's because my state of play was absolutely garbage. After a painstaking year playing like this, I can tell that it IS HARDER to win games in lower elo as an ADC or Support. Just because those roles can have the most impact on the final outcome of the game, doesn't mean that you should play them to secure the good impact. There is still another person in that lane.

I personally believe form all of my experience that Summoners who play Top lane and Jungle are the most successful at climbing. This is because Jungle and Top have a lot of presence with ganking and TP. Top lane, in low elo, has some really stupid laners, who, if you can beat, will give you an enormous lead and you can control your OWN lane and control your OWN game. Top champions are also, I think, some of the best. You have tanks (who are OP right now), Fighters (who are half tank half carry), and if you're good enough maybe even a few ADC's. The champs in top also tend to have more reliable CC and Damage.

Mid is not the same. Mid laners are usually mages, who are squishy and vulnerable to CC. They're also placed in the middle of the map, where jungles and top laners and the Bot lane can come and push, or gank. Which is not pleasant when the entire enemy team arrives in your lane from all sides.

Jungle is alright, however you still have to be slightly reliant on your team mates if you're making a gank. The jungle can be safe and free farm, but there is also a lot of out-play potential if you're a very very very good jungler, who can understand invading, ganking and lane presence well. If you understand that then, in low elo, you can solo carry.
Load more comments (1 more replies) →
1

KajiKumihoAkukei (140) | June 6, 2018 8:22am
Well, I got gold by just playing support.
I am a mid / jungle main, but I played support a lot because most of the time in low elo the supports don't have a clue how the game works or the support is auto filled and will play his preferred champion anyway.
What I mean:
Loading Comments...
Load More Comments