Adaptive Helm is good against him if you play tank

Oracle Lens to deal with the mushrooms too
2 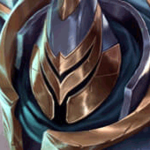 LEonadbb | March 30, 2020 6:26am
Thank you very much! I will try that whenever i play against him. And i mainly play tanky champs so yeah thank
1

Coronat3 | March 31, 2020 10:17am
Teemo can a pretty big lane bully with poke that can be hard to punish, especially if you're playing autoattack-based melee champs because of his Q blind. However, he does have a relatively small aa RANGE (smaller than Darius's E), and unless he gets fed he might be annoying late-game with his mushrooms, but not all that threatening. Remember that since he really only has 2 abilities until 6 and 1 important ability (W is a movespeed steroid and E is his passive poison on aa's), if he ever wastes his Q to farm he's very vulnerable.

In terms of champs to play into him, Darius can be pretty good due to his E outranging Teemo's auto, but since Darius can be reliant on his aa's to proc his passive fully, I would reccomend practicing the matchup before couterpicking a Teemo with Darius in ranked :P. An off-meta pick that I've tried out against Teemo with some success is Swain top. Although Swain can be a little squishy until he starts building up passive stacks, he VASTLY outranges Teemo with his E and he doesn't really care about autoattacking since E1 + yank + E2 or E1 + E2 + Q procs Electrocute (I always forget if his yank counts as an electrocute attack). Mordekaiser can also mess Teemo up pretty easily with his E+Q and, since Morde is usually okay with farming up till his mid-game Rylais/Liandry's spike, he is hard to bully out of lane.

Edit: Per the other reply, rushing Spectre's Cowl into Adaptive Helm is usually a reasonable first item for tanks vs Teemo. Adaptive Helm reduces the amount of damage that DoT magic effects do, so it's good against Teemo, Brand, Cassio, etc.
Loading Comments...
Load More Comments