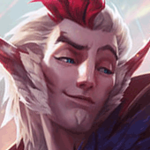 Hello, i'm T. and i'm a Rakan one trick on EUW server. (1200k mastery points on 22/02/2020.) My current account name is BoopBeep
I play Rakan since he is out in the league and I never really stopped; I wanted to create this guide to share my experience on the champ and my choices of builds.
I hope this guide can help people discovering the awesomeness of Rakan.
Now let's dance !

Why would you play Rakan ?

Rakan is a delightful mix between an echanter and a melee support. He has as much shields and heal than he has CC. I've heard a lot of people playing against Rakan saying : "He can do anything that's frustrating"
Like an assassin, Rakan will patiently wait for the right moment to engage and take the whole team under his charm.

> Hard Peel :
Rakan can protect a carry for a great amount of time, bringing shields, healing and CC 24/7. His kit has been designed for support role and this is what he is good at. This peel synergizes well with glasscanon ADCs that need protection to be efficient in fights such as

> High Mobility :
Rakan is one of the champions that moves the fastest while fighting. As long as he has mana and allies near him, Rakan will be uncatchable, able to reach enemies from the other side of a fight and will likely escape any bad situation.

> Versatile :
Rakan can be played in a lot of different ways. You can go for a classic enchanter build or Tank/CC dealer build or even an AP carry build. This also suggests an ability to adapt your stuff/build to any situation.

The Quickness can turn any fight to your advantage if used right. A good Rakan can basically carry a game himself, making him a decent pick in solo queue.

> Extremely sensitive to any kind of CC :
If I had to choose one weakness for Rakan that would be it. Any CC, even slows and silences will make Rakan completly unable to do anything as he relies on his mobility to palliate his overall squishyness. One of the most annoying spells in the game for Rakan might be the

Cassiopeia's gaz poison, blocking him in the same area for solid 5 seconds.

> Depends on his spells :
Before late game, Rakan has high cooldowns and he depends on them to be usefull. He will also run out of mana quite fast during a long fight.
If you cannot use your spells, especially

Battle Dance, you might not be able to survive to whatever is coming for you.

> Sometimes banned or picked by the enemy team :
Aaaaaaand you can't play him, and that's too bad, isn't it ? ;)

: Rakan earns a damage absorbing shield scaling on its ability power. The cooldown of

Fey Feathers is reduced by 1 second every time Rakan hits an enemy with an ability or a basic attack. This shield can possibly come during a fight and save you from a difficult situations.
Don’t hesitate to use basic attacks as much as possible and as long as your are safe.

When Rakan or Xayah is recalling, the other one can press B next to recall with him. The second to come will thus recall faster. As Rakan, you can start a recall in a bush while Xayah is clearing her last wave so she can join you at the end and earn some seconds. You can also put a ward while your love is recalling and then jump back to her swiftly with the enhanced range of

Rakan throws a short ranged feather skillshot which stops to the first enemy entity touched, dealing magic damage. Hitting a champion or an epic monster allows Rakan to heal his allies and himself by walking close to them.

Gleaming Quill is a very efficient spell in laning phase as it provides a lot of poke and sustain.

Rakan dashes to a location and bumps enemies champion in the air for 1 second, dealing magic damage.

Grand Entrance is basically your main spell, being your only cc (except ultimate). Use it to engage fights, to protect your carry from an assault or even to get through a lot of walls. Using

Grand Entrance really quickly is a unpredictable combo to engage from a very long range.

Rakan dashes to an ally, granting him a shield scaling on ability power. The ability can be re-casted for free during the following 5 seconds.

Battle Dance is a really multipurpose ability : Protecting a carry, repositioning, dodging spells, engaging fights from afar. Just like Braum does with its W, use your allies as springboards to jump into the melee.

The Quickness works with dashes which means

Battle Dance. Rakan’s ultimate is the best way he has to engage a fight. Combined with

Grand Entrance, you can CC a great part of the enemy team for more than 2 seconds.
It can also be used as an escape, considering the burst of movement speed granted by the first champion touched.
(Note that in late game, its cooldown can go up to 50 sec with a lot of cooldown reduction, which is really low.)

Flash : Essential on Rakan to engage from long distance, followed by

Grand Entrance, or to get away from bad situations.

Ignite : Ignite will increase your overall damage in fights, allowing you and your carry to get more kills. It also prevents the healing from a lot of champions.

Exhaust : Exhaust is a safer option, usefull to take down a disturbing carry. Also great in the 8.14 meta as you get a lot of botlane carries that are already taking an ignite. (

Gleaming Quill as much as possible to survive the poke. It is a short ranged skillshot though, be careful not to expose too much.

> Rakan most powerful phase might be late game. It's now time to show your moves to the enemy team. Engage on carries as much as possible with

The Quickness and make 'em dance !

Grand Entrance is a very fast and unpredictable combo that is good to make pickups. Care not to go too far though, your teammates might not be able to follow you. (based on a repeated true story)

The Quickness can be used with all your movement spells. The wellest know combo is to use your R

The Quickness and to dash in with

Grand Entrance. But it also works with your E

Battle Dance if an ally is in the melee, which is a less expected combo.


> The first target charmed with

The Quickness grants Rakan a lot of movement speed. It is an efficient spell to escape from a sticky enemy.

Xayah is obviously the greatest ADC for Rakan to play with. Her W

Deadly Plumage activates on Rakan when he is near, dealing a disrespectful amount of damage if they focus the same target. It has proved its efficiency at level 1, if you manage to convince your Xayah to take her W. (Most Xayahs wont listen and take their Q ;) )

Battle Dance's range is doubled on Xayah, making Rakan able to take much more risks. Don't hesitate to use this range to surprise enemies who would think your lover was alone...

Rakan can be called a swift slippery crowd controler that the enemy team is going to hate. It's time for you to show the enemy team who's the showmaster ! Thanks for reading this, I hope this guide helped you and i'd enjoy if you gave me your feedback. Also, if you have some questions about the champion, or my runes/item choices, I'd be really glad to discuss in the comments.