It's time for the Midseason 11 Guide Contest! Create or update guides in the following 2 weeks for the chance to win up to $200 in prizes!
Vote Vote 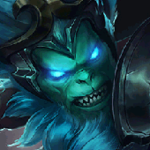 Goredrinker
build it in all matchups (core)

Sterak's Gage
core but available to change these items

42.91 %
More Wukong Counters
updates
I explained many thing in notes items , spells and runes its really important go ahead and check it . and ill explain all the remaining items when i get time
why should you play wukong and his pros
wukong before rework was just good at team fight , but after rework become op champ:-
-became unkillable
-can carry solo
-still good in team fights
-can clear jungle camps easy
-do damage more than old wukong
-hard lane face for enemies
-he has biggest chance to win against ad champs cuz of his passive

PASSIVE: Consuming a potion or biscuit immediately restores 50% of the health and mana (if applicable) it would restore. Health/mana per tick is then reduced by half for the effect's regular duration. If consumables are stacked, the instant restoration is applied after the duration of the initial consumable ends.
Additionally, you gain 5% bonus movement speed while under the effect of a potion or biscuit.

Bone Plating
PASSIVE: After taking damage from an enemy Champion , for 1.5 seconds, the next 3 spells or attacks you receive from the same enemy champion deal 30 − 60 (based on level) less damage.
Cooldown 45 seconds

Second Wind
PASSIVE: After taking damage from an enemy Champion , Health regeneration 6 (+ 4% of your missing health) health over 10 seconds.