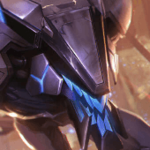 By KingAfrica
Introduction
Rarely do items synergize so well with each other and the Champions kit. And that is not an exaggeration and I will show you why. The main goal of this build is to proc Akshan's passive as much as possible. Below I will explain all the synergies and why this makes Akshan a team fighting beast.

Note that this guide revolves more around the item build rather than a "How-To-Play" guide.

, where he fires a second shot shortly after his first. If you combine it with

you fire 6 shots in rapid succession.

So simply if we then build items that take advantage of this, the effect will be devastating. Below I will list all the synergies.

)
Akshan's stack passive and Press the attack both allow you to stack on multiple people at the same time. Meaning after just 1 full attack (main and secondary) you have applied 2 stacks to up to 3 enemy champions, doing another 1/2 attack will proc both of these at the same time.

)
Every third attack from Kraken Slayer procs it's passive, dealing additional damage to the enemy champion. However, if you are using Runaan's you are firing two additional shots (if enough enemies are near enough), meaning you will proc Kraken Slayer with every 1/2 attack. So you will get the proc both on your main and second attack. The same applies to each third attack from rage blade which now procs with every 1/2 attack.

)
Yes, rage blade is an amazing item for this build that empowers everything. Since you proc rage place with every 1/2 attack it means:

- You proc your passive 2 times with every full attack.
- Apply 8 stacks of black cleaver (6 max) per full attack.
- You activate Hydra's passive 8 times in an area (it does stack)

Since you fire 6 times in short succession each applies Hydra's AOE effect. If you have Rageblade, you stack this 8 times for massive damage.

Black Cleaver stacks are applied on any physical damage. Meaning when you proc Hyrda it applies Black Cleaver's debuff in an AOE. With the 6 procs from Runaans, you will have fully debuffed possibly the entire team with 1 full attack.

)
Since you will almost always be able to get 6 stacks of Black Cleaver, you will be able to get the additional movement speed from it. Clarity also affects your Dirty Fighting Passive. This just Akshan a lot of movability and kite, which is one of his greatest weaknesses.

Here you can also swap out your boots

to help you get that movement speed bonus if you are finding it hard to kite.
Situational Items

is an optional item you get for dealing with tanky teams. Should the enemy team only have one or two tanks or aren't building armor, consider switching out black cleaver for