It's time for the Midseason 11 Guide Contest! Create or update guides in the following 3 weeks for the chance to win up to $200 in prizes!

(AP) The Dark Side of Tristana ~

(AP) The Dark Side of Tristana ~ 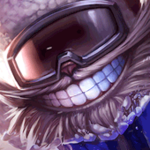 Telekhine | August 1, 2014 5:19pm
I love playing as AP Tristana, but I think her Rocket Jump is kinda lame, it is a great way to get to the targets but you can be knocked out of it pretty easy. I think it,s fare for some of the stuns and knock ups but when you can get knocked up in the air and out of the jump by
Cho'Gaths rupture i call that ********
1

YourWifeMyKid | July 12, 2014 6:03am
Umm dude , you keep me mentioning Lich Bane in the guide , but its not there in the items you recommended, what item can i replace with Lich Bane?
1

Nashor's Tooth for it to deal more damage than a

Lich Bane proc. That means that even IF

Tristana had the kit to proc Lich Bane every 2 seconds, (She REALLY doesn't), Nashor's would STILL give more damage.

You also get 20% extra CDR... which I kinda really dig since you know it's cool to use a mage spells twice in a teamfight.

I could agree if you said ''get

Void Staff instead of

Lich Bane is just not as good as Nashor's lol :P.

I agree on the

On a last note, DFG first adds 12.5% more damage than Rab's (if you wanted the right numbers). I might reconsider it.
1

Deathfire Grasp while in the middle of a

Rocket Jump. It combos well and smoothly for tristana's combo
1

throatslasher (248) | March 28, 2014 4:24pm
Why is dfg rush better? because it does something like 20-30% more damage and is cheaper. Being reliant on the cooldown is NBD because it's extremely similar to the cd on your ultimate.

Lich bane is sick on ap trist. Your poke in teamfights is substantial, E+auto chunks for hundreds and hundreds. It's also excellent for taking objectives.

Nashor's felt extremely underwhelming. As time went on, I was doing less and less damage. I wasn't stacking much AP after 3 items, and my opponents were getting more and more hp and magic resist.

Thoughts; maybe replace nashor's with lich bane. I felt I didn't get a power spike building or finishing nashor's. Doesn't make my combo any stronger, just makes my auto attacks have some utility, which is similar to lich bane's effect. and I would change the GA to a BV.

GA is meh on trist. If you die with it, you're extremely likely to die again right after. With BV, it shuts down hard engage, which is what you're extremely weak against. Besides, 50 armor will do nothing against a wukong or pantheon with elder lizard, brutalizer, randuins, etc. but it will stop wukong's ult and pantheon's stun.
1

DarkPercy (151) | March 28, 2014 4:15am
Because Rabadon's first is way more reliable, doesn't make you dependant on an item's CD, gives more harass damage, more damage when you get resets in ganks and doesn't have an annoying active that most people find hard to use. Also, the full combo damage is like +40 to +200 damage with DFG depending on how much HP left the enemy has. At half HP the difference is like +100. It's, most of the time, not the difference between a kill or not.

Lich Bane is an option, not a must-have.

Nashor's Tooth is excellent because sometimes you can't use your jump to deal damage late game (way too suicidal) so what you do is use DFG, E, R and Autoattacks. With

Arcane Blade , her autoattacks actually become significant and you get to do something while you wait for your (literally) 14+ second cooldown spells.

What would you suggest instead and why is it better?
1

shinvo | March 17, 2014 12:21am
is there any way to have some kind of sustain? besides warmogs like having some lifesteal or spellvamp that wont hinder the build.
Loading Comments...
Load More Comments